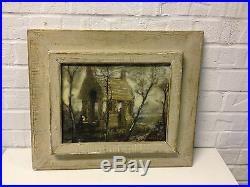 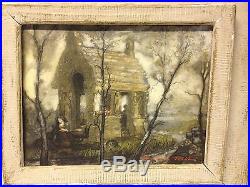 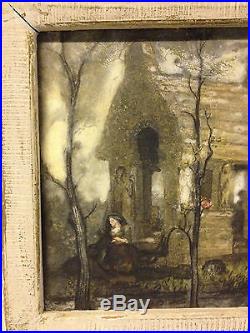 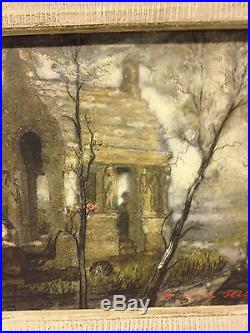 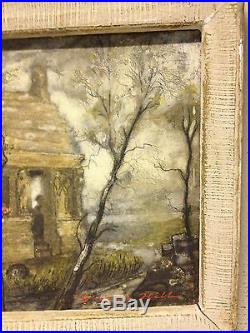 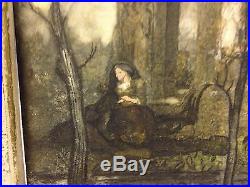 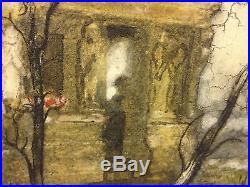 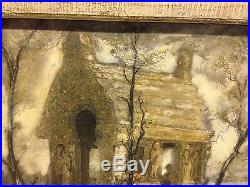 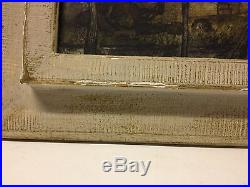 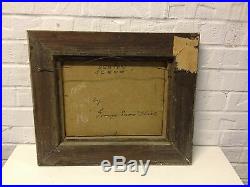 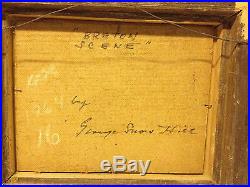 This is a nice vintage 1964 George Snow Hill signed mixed media, painting & chalk / pastel, on board titled Breton Scene. The artwork is in nice shape as the pics show with the frame having some imperfections like those seen in the pics and it comes exactly as shown. The frame measures 17 1/2" x 14 3/4" and the sight is 10 3/4" x 8 1/4". Petersburg, Florida until his death in 1969. He founded the Hill School of Art in St. Snow Hill was born in Munising, Michigan in 1898. He studied naval engineering and architecture at Lehigh University from 1917 until 1918, before graduating with a bachelor's degree in 1923 from Syracuse University where he met his wife Polly Knipp Hill, an etcher. They studied in Paris together in the 1920s and were married there. He went to Paris on a Fellowship and attended the Acadamie Colarossi and the Academie de la Grande Chaumiere; he also had a studio in the city. His work was shown at the Salon des Artistes Francaise from 1923 until 1929, and he had a one-man exhibition at Simonson Galleries in Paris in 1924. In 1924 he also exhibited at the Royal Academy in London, England. He came home to the United States in 1929 and worked as a portraitist in New York City before establishing a studio in St. Snow Hill's style has been compared to that of Thomas Hart Benton, who was New Deal muralist, as well as to regionalists John Steuart Curry and Grant Wood.

Hill's figures, like those in the Mannerist style, are elongated, and his scenes include action. Some of his work was done for the Works Progress Administration.

A commission for work in a Clearwater courtroom was stopped by Judge John U. Bird in 1934 because he did not want pictures of sunbathers with brassiere-type bathing suits hanging over my bench.

" Another of his murals was torn in 1966 by an activist Joseph Waller (who later changed his name to Omali Yeshitela) because the mural of white sunbathers and black entertainers on the beach "depicts Negroes in a most despicable, derogatory manner. Additional objections arose in 1998 over a bare breast in a mural at the Coast Guard station in St. Hill's painting at the Madison Post Office was also controversial when a postmaster raised concerns over the depiction of all-white supervisors and black workers alongside white workers. Hill produced five murals for the Pinellas County Courthouse in Clearwater, Florida depicting county history.

Hung in the Clearwater city auditorium, they became lost after the building was razed in the 1960s. For City Hall, he painted St. Petersburg scenes of the pier and a picnic. African American community leaders later objected to the depictions of black musicians in his painting Picnicking at Pass-a-Grille.

After it was torn down, the painting was lost after the vandal's trial. He also painted a mural in the St. Petersburg Coast Guard building's wardroom depicting the service's history. A 1933 Chicago World's Fair painting moved to the Florida State Capitol has also been lost, as well as murals for and post offices in Florida and Alabama. Murals at Tampa's Peter O. Knight Airport were damaged when they were removed pending the airports demolition. His aeronautical paintings included one showing Tony Jannus' famous flight from St.

Several of the murals have been restored and are on display at the Tampa International Airport. He signed his paintings G. He had a son George Jr. His wife died in 1989. Work Paintings for the Ferargil Galleries in New York, NY in 1927 and 1929 Paintings for the Syracuse Museum of Fine Arts, Syracuse, NY, 1927-32 Painting at the J.

Post Office murals in Perry, Florida 1940 Mural of the St. John River for the Florida buildings at the Century of Progress Exhibition in Chicago, Illinois 1933 Cypress Logging (1938) for a Perry, Florida Post Office Murals for New York Worlds Fair in 1939 Building the Tamiami Trail painting in Wolfsonian Institute permanent collection, Miami Work at the Smithsonian Institution, Washington, D. Work at the Georgia Museum of Art, Athens, Georgia Mural Studies for the St. Louis Post Office competition, ca. 1939 Loading Pulpwood mural for the 1941 Milton Post Office, later held at the Imogene Theater Garden Cafeteria fresco mural of Floria flora and fauna, St. Petersburg (destroyed in August 2012 when the building was demolished) Long Staple Cotton Gin for the Madison, Florida Post Office Fishing at the Pier and Picnicking at Pass-a-Grille for St. Petersburg City Hall Stained glass window at St. Bartholomews Episcopal Church, 34th Street South in St. Like us on Facebook at The Option B Designery. The item "Vintage 1964 George Snow Hill Signed Mixed Media Art on Board Breton Scene" is in sale since Wednesday, December 17, 2014.

This item is in the category "Art\Mixed Media Art & Collage Art". The seller is "nceantiqueswntd" and is located in Saint Louis, Missouri.