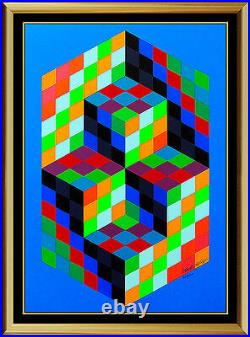 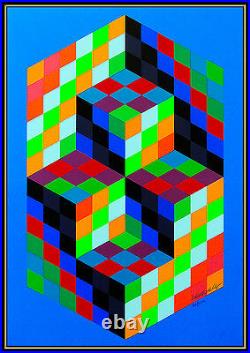 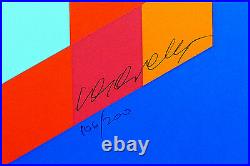 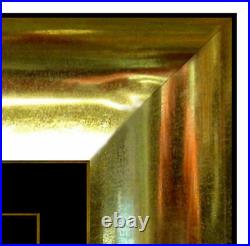 Victory Vasarely Authentic, Embossed Screenprint w Collage, Custom Framed and listed with the Submit Best Offer option. Accepting Offers Now: Up for sale here we have an Extremely Rare, Screenprint with Embossing and Collage on Art Board by Victor Vasarely, titled "Vaar". This is a prestigious and modern creation that pays tribute to Vasarely's grand themes of symmetry and illusion. Additionally it is a beautiful piece that will add to the ambiance of any home, business or office. Also, this rare artwork has been elaborately custom framed as shown, in an expensive moulding to further enhance the spectacular nature of this artwork.

Thus, at this unbeatable value, the item will likely sell before the end of this listing, as the first person to meet our bottom line will be the lucky new owner. Do not miss this opportunity to own a work by the Master of Illusion, Victor Vasarely. He is internationally recognized as one of the most important artists of the 20th century. He is the acknowledged leader of the Op Art movement, and his innovations in color and optical illusion have had a strong influence on many modern artists. In 1947, Vasarely discovered his place in abstract art.

Influenced by his experiences at Breton Beach of Belle Isle, he concluded that "internal geometry" could be seen below the surface of the entire world. Vasarely was born in Pecs, Hungary in 1906. After receiving his baccalaureate degree in 1925, he began studying art at the Podolini-Volkmann Academy in Budapest. In 1928, he transferred to the Muhely Academy, also known as the Budapest Bauhaus, where he studied with Alexander Bortnijik.

At the Academy, he became familiar with the contemporary research in color and optics by Jaohannes ltten, Josef Albers, and the Constructivists Malevich and Kandinsky. During the 1950's, Vasarely wrote a series of manifestos on the use of optical phenomena for artistic purposes. Together with his paintings, these were a significant influence on younger artists. SUBMIT BEST OFFER, All OFFERS CONSIDERED. Here is a large and vibrant Victor Vasarely Original Embossed Screenprint w Collage, "Vaar" from his illusions using geometric shapes, which gives this piece the look of a relief sculpture. Worth mentioning again is the fact that Vasarely is widely regarded as one of the greatest artists ever, and a master of Op Art. Hence why his artworks sell at 10s - 100s of thousands at galleries. However, this is your chance to own an authentic piece at a much better deal.

It is an ORIGINAL, HAND SIGNED and Numbered (106 of 200) Color Screenprint that is representative of Vasarely's full realm of genius, including technique and detail. This is one of our personal favorite and most magnificent pieces that Vasarely has ever created and it looks even better in person. Victor Vasarely's fine art has been exhibited in major museums around the world his works of art are to be found in some of the most prestigious public and private collections worldwide.

The item "Victor Vasarely Original Screenprint Collage Hand Signed Large Modern EMBOSSED" is in sale since Wednesday, March 27, 2019. This item is in the category "Art\Mixed Media Art & Collage Art". The seller is "neiman123" and is located in Minneapolis, Minnesota.