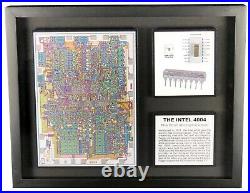 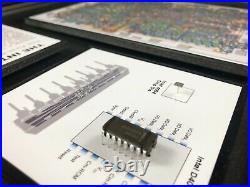 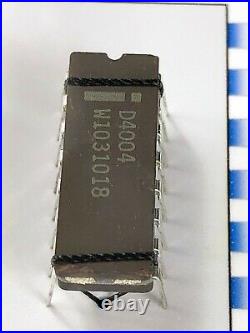 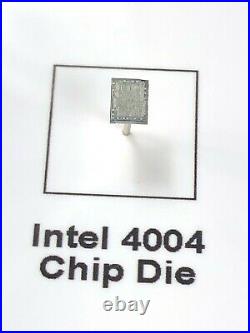 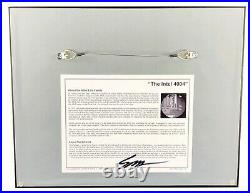 This artwork is a mixed media display featuring the Intel 4004. This artwork contains a rare New-Old-Stock (NOS) D4004, which is a gray ceramic package with tin leads. The D4004 was made in Malaysia, the first week of 1981. The artwork also includes an extremely rare 4004 chip die (just the naked chip). I did this artwork in anticipation of the 50th anniversary of the invention of the microprocessor, the Intel 4004, which will be November of 2021.

I will only be able to make a very few artworks with a 4004 die. Introduced in 1971, the Intel 4004 was the worlds first microprocessor.

Although created for a calculator, the 4004 was the first semiconductor device that provided, on a single chip, the functions of a general-purpose computer. Intel created the 4004 with Ted Hoff and Federico Faggin as the lead designers with Stan Mazor and Masatoshi Shima as co-contributors.

The 4-bit 4004 was very limited by modern standards. Initially conceived as a way to cut costs, the Intel 4004 was the beginning of a new era of complex intelligent electronic devices. The artwork is framed in an 11"x14" black shadow box frame, with glass. All framing materials are acid free. A narrative about the artwork that includes the artists signature is placed on the back of the artwork. Limited by availability of chips.

Want to see more ChipScapes? Also please check out my ChipScapes. Computer chips start out as ordinary sand, which is silicon dioxide. However, the silicon must be made very, very pure. The first step is to melt the sand, in a furnace that reaches about 3200.

F, and mix with carbon. This first purification process creates 99% pure Silicon, a common output is Silicon Carbide. The Silicon Carbide is processed in a trichlorosilane distillation method to create 99.9999% pure silicon called polycrystalline silicon. The polysilicon is broken up into chunks. These chunks are melted in a crucible at about 2500. A silicon crystal seed is dipped in molten silicon and slowly drawn out to create a cylinder of silicon. These silicon cylinders are some of the purest crystals on the planet. Once the silicon cylinder is grown to the desired diameter, it is sawed into wafers. These wafers are polished to achieve a very flat mirror surface. Transistors, and other micro-electronic parts, are built on the polished wafer in layers in a process called etching. The wafer is then sawed into its individual chips. Each chip is mounted in an electronic package that serves to protect it and connect it to the outside world. It has been said that computer chips are the greatest value added product in the world. We essentially take a pile of sand and change it into thousands of dollars worth of computer chips. These artworks are the creation of.

Are photographs taken of computer chips, boards, and other computer artifacts. They are sort of chip landscapes, or. Most often a macro-lens or microscope is used with special lightning to achieve these unique artworks. Intel, IBM, Fairchild, DEC, Signetics, Intersil, AMD, Zilog, Motorola, MOS, NEC, Texas Instruments, are some of the great chip making companies.

Chips like the Intel 4004, MOS 6502, Zilog Z80, AMD 2901, IBM PowerPC and others have changed the way people work and play. Are dedicated to preserving and sharing these computing and communication technologies that changed the world. Artworks are fine collectible artworks.

The seller is "chipscapes" and is located in Winter Park, Florida. This item can be shipped worldwide.