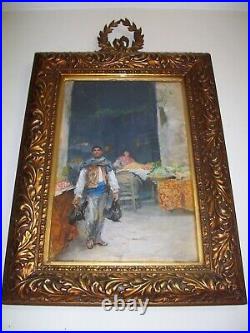 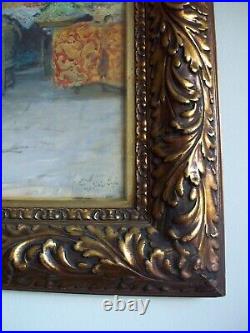 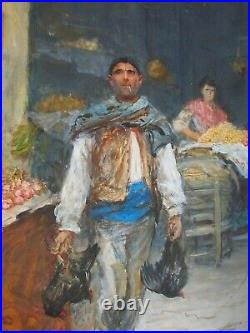 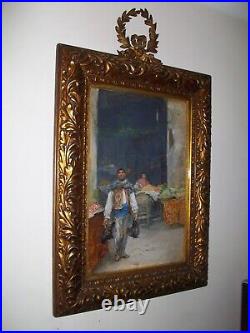 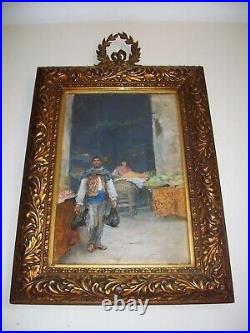 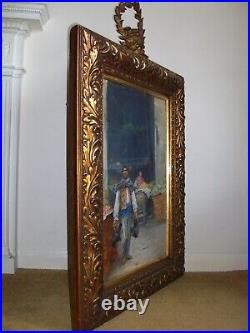 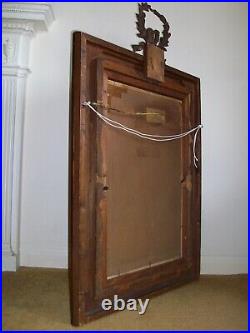 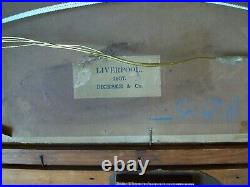 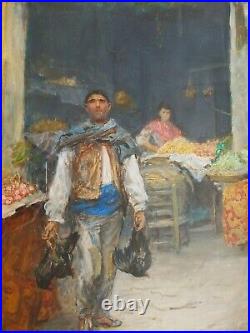 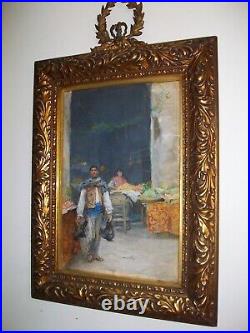 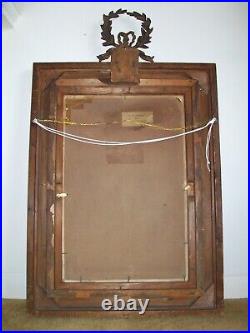 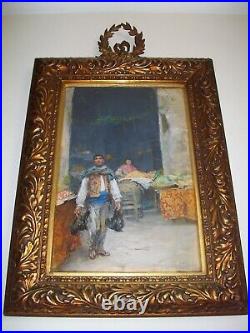 Presented within a good quality elaborate wooden frame. Metal leaf decoration, attached to the top of the frame. The frame comes free of charge with the painting. Please view all of the detailed images. Sir Hubert von Herkomer was a Bavarian-born British painter, pioneering film-director and composer. He was a very successful portrait artist, especially of men, but he is mainly remembered for his earlier works which took a realistic approach to the conditions of life of the poor. His painting, "Hard Times", (1885 ; Manchester Art Gallery), showing the distraught family of a travelling day-labourer at the side of a road is one of his best-known works. His family was poor and they left Bavaria in 1851, for a better life in the United States of America.

While in Southampton Hubert went to the School of Art and began his formal art training. In 1866 Hubert entered upon a more serious course of art study, at the South Kensington Schools and in 1869 exhibited for the first time at the Royal Academy in London. In 1869 he began working as an illustrator for "The Graphic", a rival of the Illustrated London News.

His oil painting, "The Last Muster" (1875), established his position as an artist of high distinction at the Royal Academy. He was elected an associate of the Academy in 1879 and an academician in 1890, an associate of the Royal Watercolour Society in 1893 and a full member in 1894. In 1885 he was appointed Slade Professor of Fine Art at the University of Oxford, a position he held until 1894. He was the first President of the Oxford Art Society, established in 1891.

In 1899, Hubert Herkomer was ennobled as "Ritter von Herkomer" by Otto of Bavaria. The same year he was awarded the Pour le Merite for Arts by Emperor Wilhelm II of Germany. On her death-bed, Queen Victoria was initially photographed in study and eventually painted by Herkomer, as an alternative to the more traditional mask produced in wax, which her son, the new King Edward VII, decried. The painting, showing the Queen lying half-length among lilies and other flowers, holding a cross in her right hand, is part of the Royal Collection held at Osbourne House on the Isle of Wight.

In 1907, Hubert Herkomer was knighted by King Edward VII. Despite being a prominent member of the Royal Academy of Arts, Royal Watercolour Society and Royal Society of Painters-Etchers, as well as being on familiar terms with the royal family, Hubert Herkomer was never totally accepted by the British establishment, as he was ultimately a victim of the deteriorating relationship of Great Britain and Germany, which he shuttled in between, spending most of his summers in Bavaria. Four of his pictures are held in the national collection at the Tate Gallery, London.

His works can also be found in several British collections including the Manchester Art Gallery, Southampton City Art Gallery, Leeds Art Gallery, Lady Lever Art Gallery, Walker Art Gallery, Liverpool, Oldham, Derby Art Gallery and the City of London. Hubert Herkomer died at Budleigh Salterton, East Devon on 31st March 1914. He was buried in St James's church, Bushey. This painting is offered for sale on a collection only basis! If you have any questions please contact me. This item is in the category "Art\Paintings". The seller is "rdno" and is located in this country: GB.

This item can be shipped to United Kingdom.