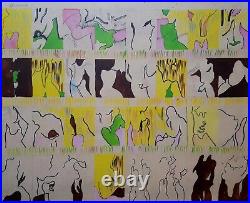 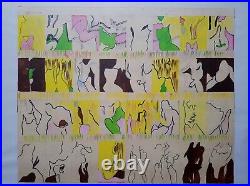 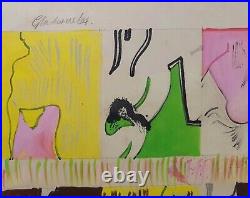 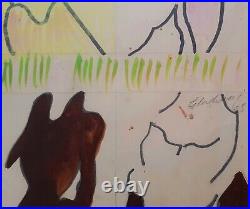 This original painting in mixed media (mainly gouache, with some pencil and inks) on paper is signed by the artist in the margin upper left'Gladwell' and dated (19)64 and it is signed again within the image lower right and dated (19)65. Presumably it was a work in progress overlapping those years in the mid 1960s.

It has been housed in a clipboard'frame' under plexiglass and has fixings to the back of the board allowing the work to be displayed'as is'. The condition of the painting is generally good for its age. The paper sheet is complete and has no tears to it.

The work measures about 22.2 x 27.2 inches paper size; clipboard size 23.6 x 31.6 inches. Nframed but held in place within a clipboard for display purposes.

He was born at Didcot in Oxfordshire and studied art at Atelier Colarossi in Paris 1949-50. In 1958 he represented Great Britain in the important Hamburg Exhibition in Germany. He also exhibited at a number of London galleries including Archer Gallery, O'Hana Gallery, Piccadilly Gallery, Molton Gallery, in Paris, and later in life in Zurich. During the 1960s he was commissioned to paint extensive murals for Sussex University and for the Georgian Club in London. A retrospective exhibition was held at the University of Sussex 1962-63. Later in life he made extensive journeys to work in Japan, Africa, and in North and South America. His work is represented in a number of public collections including The Arts Council Collection; Ben Uri Gallery & Museum; Towner Art Gallery, Eastbourne; University of Sussex; and the University of Johannesburg. This item is in the category "Art\Paintings". The seller is "bfc_clarets1882" and is located in this country: GB. This item can be shipped to United Kingdom.