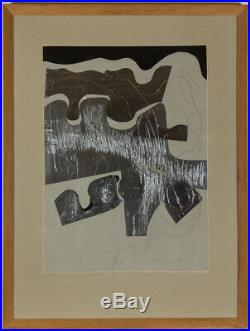 A fine abstract composition with graphite, aluminium foil and pen and ink by the artist Peter Thursby. There is an artist's and exhibition's label to the reverse with additional details. Well-presented in a card mount and in a simple wooden frame. In very good condition overall, with minor surface marks. Small scuffs to the frame.

He was born Peter Lionel Thursby in Salisbury, and studied at St. Paul's College, Cheltenham, the West of England College of Art, Bristol and Exeter College of Art 1954-60. Following an early showing at the Young Contemporaries at the Mall Galleries in 1957 and with the AIA, his solo shows include exhibitions at the Arnolfini Gallery, AIA gallery, London, Northampton Museum and Art Gallery, Royal West of England Academy, Bristol, Plymouth Art Gallery, Marjorie Parr Gallery, London and the Bruton Street Gallery, London. In 2003, a retrospective exhibition was held at the Salisbury and South Wiltshire Museum, Salisbury. His major commissions include sculpture in the Guildhall Square, Exeter, Las Colinas Towers Plaza, Dallas, Texas and Mazda (UK) Head Office, Tunbridge Wells.

He was an elected member of the RBS and was President of the Royal West of England Academy from 1995 to 2000. He had a retrospective at the Royal Albert Memorial Museum, Exeter (along with the painter Alan Richards), to mark the millennium celebrations. Thursby was particularly proud that'Maquette for Optimism II' was presented to the HM the Queen when she visited the Royal West of England Academy during the period when he was the societies President. In 1995 he was awarded an Honorary Degree of Doctor of Arts by the University of the West of England, Bristol and he held his last retrospective at Guernsey Museum and Art Gallery in 2005. Peter Thursby was a Fellow of the RBS.

Framed pictures are packed into custom made cartons. All of our items come with a Certificate of Authenticity. Bill, one of the directors was joined by his son, Dan, in 2012. Staff were gradually added as the business grew.

Bill and Dan (now managing director) are joined by 4 art historians/ gallery specialists, 2 stock controllers/dispatchers and an art conservation specialist. We operate from offices outside of Bradford on Avon, Wiltshire and utilise various humidity controlled off-site storage facilities in the local area. The art in our online gallery has been handpicked by our team of highly qualified art historians.

We try our hardest to ensure that artworks are described and photographed as accurately as possible. This includes using strobe lighting and colour calibrated screens to colour check our images. The item "Peter Thursby (1930-2011) 1967 Mixed Media, Main Form" is in sale since Thursday, February 13, 2020. This item is in the category "Art\Mixed Media Art & Collage Art". The seller is "sulisfineart" and is located in Bradford-on-Avon.