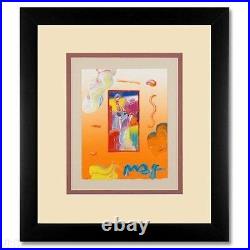 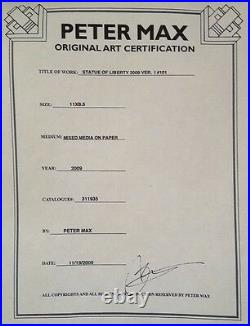 OWN THIS DAZZLING MIXED MEDIA PIECE FROM WORLD-RENOWNED ARTIST PETER MAX! The visual voice of a generation, Max continues to create exceptional pieces which simultaneously pay homage to the past while shedding light on future incarnations of popular art. " Statue of Liberty 2009 VER I #101 " is an original acrylic mixed media on paper hand signed by Peter Max! This piece has a brand new custom archival frame and is ready to hang. The art is hinged to acid-free foam core using 100% acid-free ATG tape, with a 2-ply rag between the art and the mat board. 21" x 23" (with frame), 8.5" x 11" (image). Peter Max's family provided him with an extraordinary and culturally enriched childhood. Born in Europe, Max grew up in Shanghai, China, until the age of ten. His parents then took him on an odyssey across China to a Tibetan mountain camp at the foothills of the Himalayas, then up 9000 feet to an idyllic mountaintop retreat.

This was followed by a journey to India, then Africa and Israel, where he studied painting with a Viennese Fauvist. Their next stop was Paris, where Max went to art school and was influenced by the rich French culture. In 1953, at the age of 16, Max and his family emigrated to the United States. In New York, Max attended the renowned Art Student's League, where he was taught the rigid rules of realism; this was followed by a new fascination with commercial illustration and graphic arts.

This new direction was a turning point that led to an incredibly successful career. He began creating album covers and book jackets that won awards. Then, influenced by the politics of the'60's, contemporary photography and transcendental meditation, Peter Max's completely original style emerged. Combining his fantastic illustration with bold colorations and psychedelic subject matter, his art epitomized the youth culture of the 1960's. His unsurpassed originality has led to a deserved fame and fortune that has lasted literally for generations.

During the 1970's, Max retreated from mass exposure to submerge himself in self-expression by devoting himself to painting. Occasionally, he allowed himself to come out for special commissions, such as the first ten cent stamp, projects for Federal government agencies, and the U. In the 1980's, Max focused on creating his new atelier, producing paintings, limited editions and works of mixed media that expressed his concerns for the environment and human and animal rights.

Peter Max's commissions and exhibitions have been numerous. In 1991, Max had the largest turnout ever for his one-man exhibition in St. He painted the portraits of four American presidents, and in 1993, he created posters for Bill Clinton's inaugural. He has always been ready, too, to contribute artistically to many major events, by producing art for the Summit of the Americas, the United Nations Earth Summit, the Woodstock Music Festival, and has been designated the Official Artist for the Grammy Awards and five Super Bowls. His contribution to the arts has left an indelible mark on our culture, and, according to the artist, the future is filled with enormous optimism, and a need for a greater responsiblity to our planet. " Fortunately, for us, he is eager to serve as our "Global Artist. The item "PETER MAX Statue of Liberty Framed ORIGINAL MIXED MEDIA" is in sale since Thursday, April 4, 2019. This item is in the category "Art\Mixed Media Art & Collage Art". The seller is "qualityartbargains" and is located in Illinois. This item can be shipped to United States, Canada, United Kingdom, Denmark, Romania, Slovakia, Bulgaria, Czech republic, Finland, Hungary, Latvia, Lithuania, Malta, Estonia, Australia, Greece, Portugal, Cyprus, Slovenia, Japan, China, Sweden, South Korea, Indonesia, Taiwan, South africa, Thailand, Belgium, France, Hong Kong, Ireland, Netherlands, Poland, Spain, Italy, Germany, Austria, Bahamas, Israel, Mexico, New Zealand, Singapore, Switzerland, Norway, Saudi arabia, United arab emirates, Qatar, Kuwait, Bahrain, Croatia, Malaysia, Brazil, Chile, Colombia, Panama, Jamaica, Barbados, Bangladesh, Bermuda, Brunei darussalam, Bolivia, Ecuador, Egypt, French guiana, Guernsey, Gibraltar, Guadeloupe, Iceland, Jersey, Jordan, Cambodia, Cayman islands, Liechtenstein, Sri lanka, Luxembourg, Monaco, Macao, Martinique, Maldives, Nicaragua, Oman, Peru, Pakistan, Paraguay, Reunion, Viet nam, Uruguay.