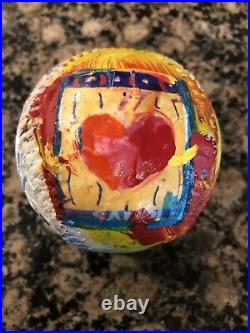 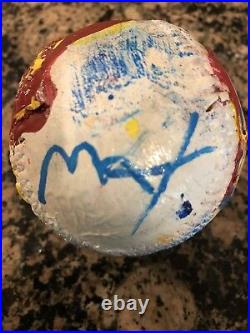 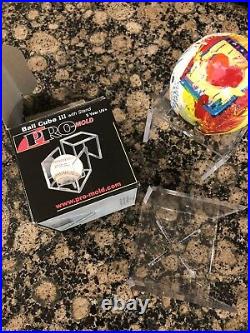 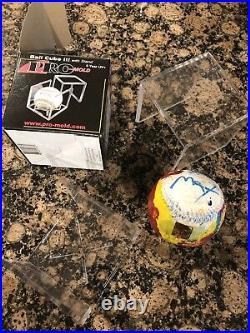 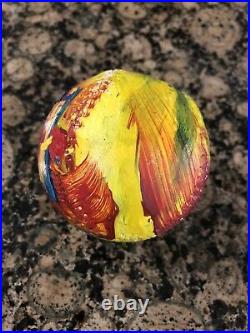 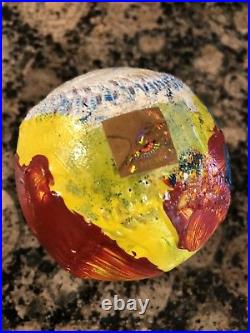 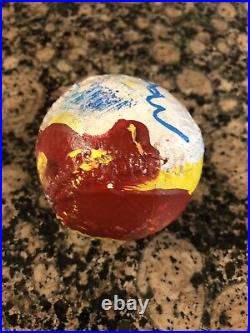 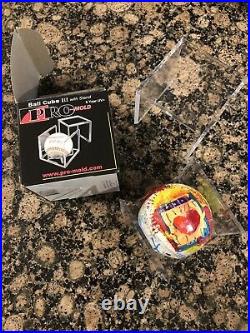 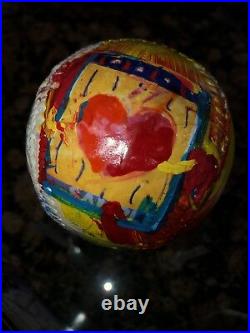 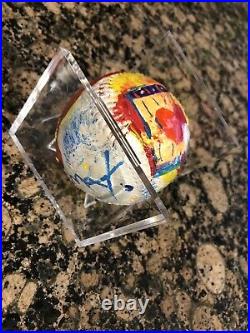 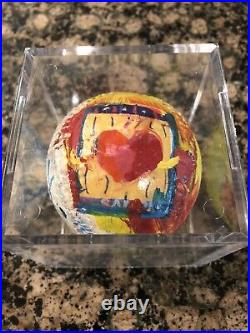 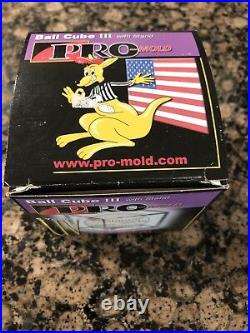 One-of-a-kind baseball painted in acrylic with Max's unique and unmistakable Pop Art style. Includes UV protection baseball cube that is the mainstream collector's choice for archival storage of Major League Baseballs. This baseball case features a built in stand to keep the ball straight so the autograph stays aligned front and center. It has two equal u-shaped plastic pieces that slide together to form a precision fit. The piece includes an official Peter Max Studio hologram for authenticity purposes.

Born in Berlin, Germany in 1937, Peter Max was raised in Shanghai, China, where he spent the first ten years of his life. He lived in a pagoda-style house situated near a Buddhist monastery, a Sikh temple, and a Viennese cafe.

With all that richness and diversity of culture, he still had a dream of an adventure yet to come in a far-off land called America. From American comic books, radio broadcasts, and cinema shows, young Peter formed an impression of the land of Captain Marvel, Flash Gordon, swing jazz, swashbucklers, freedom, and creativity. In 1953, Peter's family emigrated to America after a six-month visit to Paris. During this relatively short stay, Peter enrolled in an art school and began to absorb the culture and artistic heritage of Paris.

At the age of sixteen, he realized his childhood fantasy and arrived in America. After completing high school, Max continued his art studies at The Art Student's League, a renowned traditional academy across from Carnegie Hall in Manhattan. Here, he learned the rigid disciplines of realism and developed into a Realist painter. As a portraitist for four former U. Presidents Carter, Ford, Bush, Sr. And Reagan, Max was approached by the inaugural committee in 1993 to create posters for Bill Clinton's inauguration.

He was later invited to the White House to paint the signing of the Peace Accord. In 1999, Max was commissioned to paint a Boeing 777-200ER super jet for Continental Airlines to commemorate New York City's New Year's celebrations, and usher in the new millennium, (it has since been repainted). The multi-themed, vibrantly colored masterpiece is a retrospective-type mosaic of some of Max's most iconic images such as Liberty Head, the skyline of New York and a splash of galaxy-inspired themes. Max has also been the official artist for many major events including, among others, the World Cup, the Grammy Awards, the Rock and Roll Hall of Fame, and the Super Bowl. Whether viewing Peter Max's realist portraits, Expressionist paintings, or Pop Art creations, one is left without a doubt that he is an artistic luminary of the twentieth century.