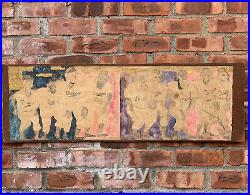 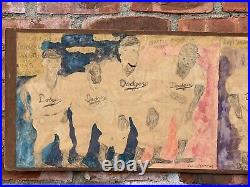 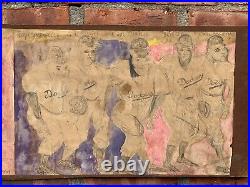 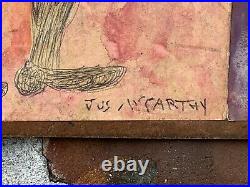 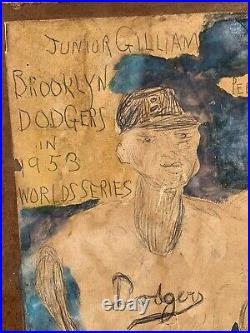 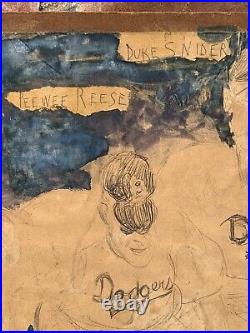 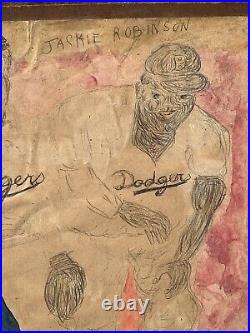 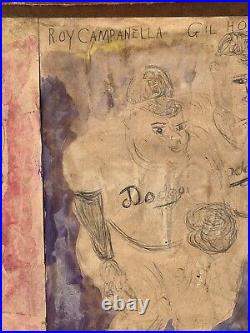 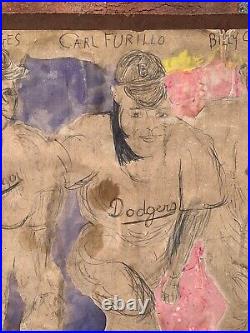 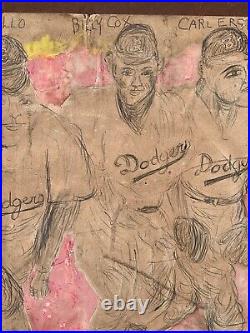 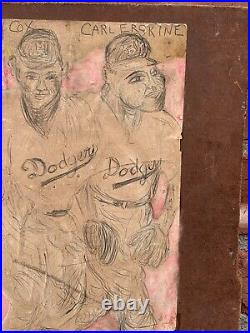 In this example he depicts members the 1953 Brooklyn Dodgers in the World Series including the great Jackie Robinson as well as Pee Wee Reece and Duke Snider, Roy Campanella, and Gil Hodges... The 1953 World Series matched the four-time defending champions New York Yankees against the Brooklyn Dodgers in a rematch of the 1952 Series, and the fourth such matchup between the two teams in the past seven seasons.

The Yankees won in six games for their fifth consecutive title. The artwork is composed of two sheets of paper laid down to a Masonite panel. Signed by the artist on middle bottom. Most likely from being on the panel. Maintains its naive folk art quality.

Board - 38 1/4 x 12 1/2. Paper Sheets - 11 7/8 x 35 3/4. Justin McCarthy (1891 - 1977). Born in Weatherly, Pennsylvania, he produced hundreds of drawings and paintings in asymmetrical composition, exaggerated drawing and unnatural colors. His subjects ranged from American history -- Washington crossing the Delaware-- to abstract to still life and figure.

His early life was plagued with sadness that included the death of his father and brother and flunking out of the University of Pennsylvania law school. From 1915 to 1920, he was in a mental institution and began to paint. From then on he lived and painted at the family home in Weatherly. He was discovered in 1960 by artist Sterling Strausser.