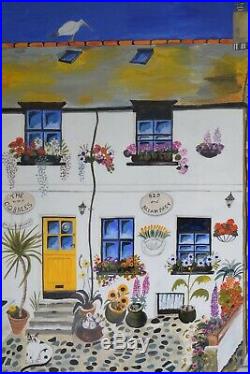 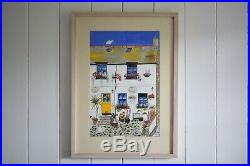 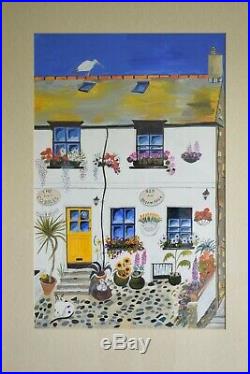 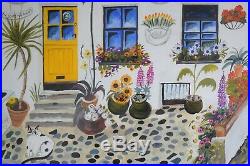 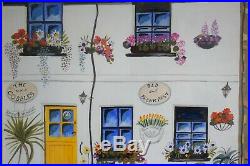 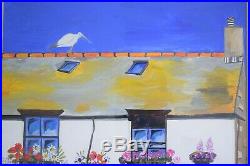 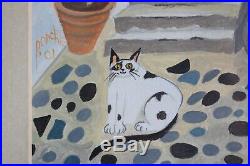 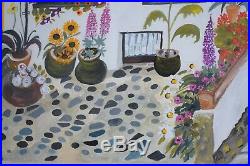 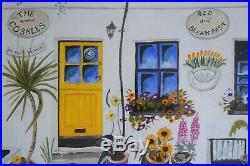 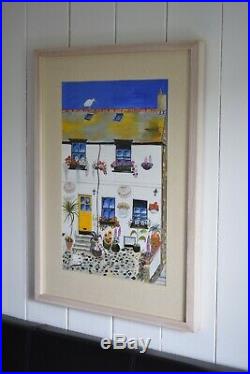 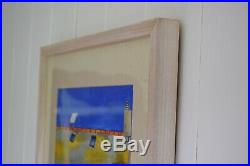 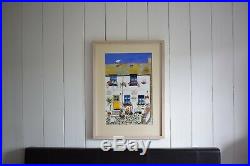 This large, striking original painting of The Cobbles Bed & Breakfast St Ives with its bright, happy feel instantly captures you and transports you strait to the heart of the quaint Cornish town. Typical of Ponckle's fun, naive style she is recognised for, signed and dated 2001. The painting is of mixed media and acrylic, professionally framed and mounted in a contemporary solid wood lime-washed frame.

74.5cm Height x 54cm wide (frame). 55cm in height x 35cm wide (picture). Ponckle was a popular artist in St Ives and an eccentric character on the St Ives art scene for over thirty years. Her gallery on Island Square was the scene of a prolific artistic career which resulted in national and international commercial success.

Ponckles Gallery was also the social hub of the artistic community in the Cornish seaside town with a rich cultural heritage going back to the 1950s. Ponckle was born in Chingford in 1934, the oldest girl of five siblings. From an early age, she showed signs of being the black sheep of the family and embracing the role with relish. She showed artistic talent and a rebellious streak that both took her in an entirely different direction to the rest of her family. At 17 she met and fell in love with well-known jazz pianist and arranger Ken Moule, who immediately renamed her Ponckle (a name she kept for the rest of her life, eventually changing it by deed poll) and asked her to marry him.

He also recorded a song in her honour, Son of Ponckle. She later moved to Paris, where she worked as a stylist for the Katherine Dunham Dance Company. Her constant restlessness led to divorce from Ken Moule. Ponckle then married photographer Trevor Clark in 1964 and had two sons, Gavin and Jake.

They moved to Mallorca in 1969, where Trevor became a travel photographer. Ponckle was his stylist and she also began making large fabric collage portraits. After seven years, she and her sons moved back to England and she divorced Trevor. She continued making fabric portraits and had a one-person show at the Courtauld Institute in London in 1974. Ponckle moved with her sons to St Ives in 1978.

She opened a gallery in her house in Norway Lane, exhibiting her quirky paintings of local scenes, gradually making a name for herself. In 1985 she opened Ponckles Gallery on Island Square and started painting cats with views of St Ives. Ponckles Gallery became an important social and artistic meeting place; the terrace was a riot of colour, flowers and jazz music and there was never a dull moment. Ponckle became friends with local artists Hyman Segal, Max Barrett and Patrick Hughes. Other regular visitors to the gallery were Molly Parkin, who lived locally, and George Melly, a regular performer at the St Ives September Festival whom Ponckle knew from her London jazz days.

The item "Original Ponckle Painting The Cobbles Bed & Breakfast St Ives, Cornwall" is in sale since Friday, June 19, 2020. This item is in the category "Art\Paintings". The seller is "grumbla_lane" and is located in Penzance. This item can be shipped to United Kingdom, Ireland.