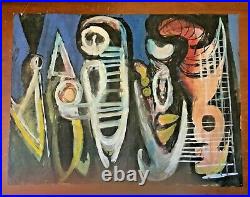 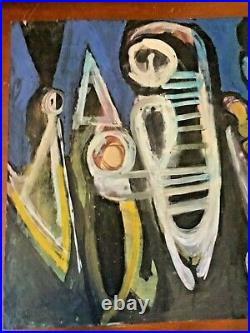 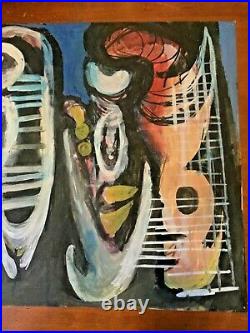 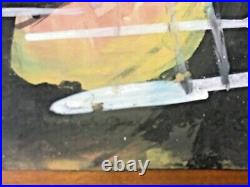 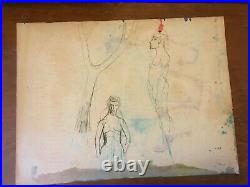 In overall great condition with some edges and corners creased and worn; some staining and discoloration to back of paper from paint. Dimension of paper is 24.25" W x 18.75". All are dated from the late 1950s, some signed and unsigned. This one is signed by artist in the lower right corner. Rogers art has been sitting in a storage unit unseen.

Learn more about the artist below. George Jay Rogers was born in Yonkers, New York on June 9, 1926. During the Great Depression George's mother being a single mother and falling on hard times sent George to a home for boys in New York City. George remained there and later attended The School of Industrial Arts in New York City. Shortly after his 18th birthday George enlisted in the Army.

He was sent to Germany where he drove a light truck as a message center courier. He was given an honorable discharge and moved back to New York City. Under the GI Bill he enrolled in the Art Students League of NYC in 1948. Here George studied under noted artists Robert Brackman, Morris Kantor, Louis Bouche, Harry Sternberg and Robert Beverly Hale to name a few. In order to support his desire to paint, George worked as a message courier in NYC.

In the late 1950s George painted in the surreal style. Later in the early 1960s his style evolved to futeristic cityscapes, ritualistic paintings, exotic women and nudes.

Rogers hoarded his life works when he moved to Florida around 1990. The cache of paintings by George Jay Rogers was recently discovered in the studio on his property when his guardian was assigned to dispose of his estate. This important new discovery of American art is now being offered for sale. The item "NYC George Jay Rogers Modernist Abstract Surrealism Acrylic Painting Paper 1956" is in sale since Sunday, July 21, 2019. This item is in the category "Art\Paintings".