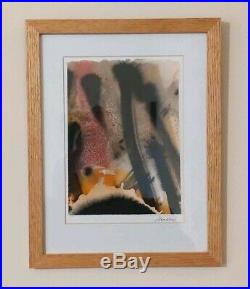 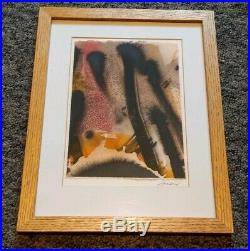 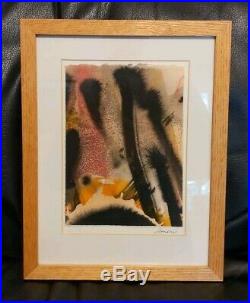 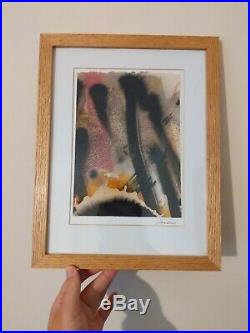 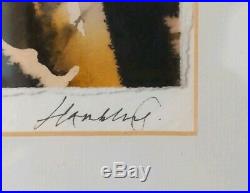 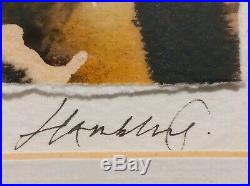 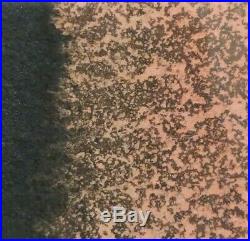 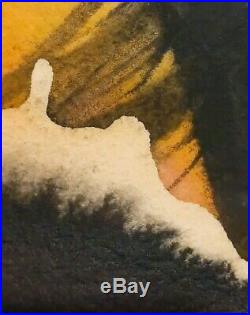 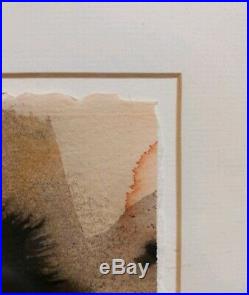 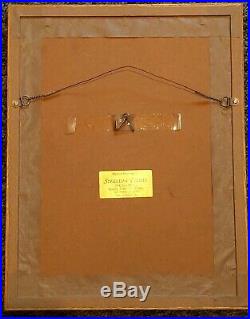 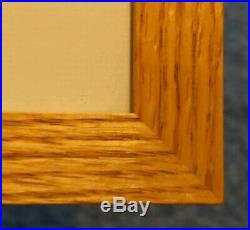 Frame: 14 x 11 inches. Beautiful painting with bright, and dark contrasting colours. The photos in this advert don't do the picture justice. Professionally framed with an excellent condition oak frame. Abstract style typical of Maggi Hambling. Maggi Hambling CBE (born 23 October 1945) is a British painter and sculptor. Perhaps her best-known public works are the sculptures A Conversation with Oscar Wilde in London and Scallop, a 4-metre-high steel piece on Aldeburgh beach dedicated to Benjamin Britten.

Both works have attracted a great degree of controversy. Maggi Hambling was born in Sudbury, Suffolk. She had two siblings, a sister, Ann, who was 11 years older, and a brother, Roger, nine years older than Hambling. Her brother had wanted a brother but ignored the fact that his younger sibling is female and taught her carpentry and how to wring a chicken's neck.

Hambling was close to her mother who taught ballroom dancing and took Hambling along to be her partner. It was from her father that she inherited her artistic skills. She was not as close to her father as she was to her mother but when her father retired at the age of 60, Hambling gave her some oil paints and discovered that she had a knack for painting. Hambling first studied art under Yvonne Drewry at the Amberfield School in Nacton.

She then studied at the East Anglian School of Painting and Drawing from 1960 under Cedric Morris and Lett Haines, then at Ipswich School of Art (196264), Camberwell (196467), and finally the Slade School of Art, graduating in 1969. Hambling is a painter as well as a sculptor. She is known for her intricate land and seascapes, including a celebrated series of North Sea paintings created since late 2002.

She is also known for her portraits, with several works in the National Portrait Gallery, London. In 1980 Hambling became the first artist in residence at the National Gallery, after which she produced a series of portraits of the comedian Max Wall. She has taught at Wimbledon School of Art.

Women feature prominently in her portrait series. For example, Hambling was commissioned by the National Portrait Gallery to paint Professor Dorothy Hodgkin in 1985.

The portrait features Hodgkin at a desk with four hands, all engaged in different tasks. Her wider body of work is held in many public collections including the British Museum, Tate Collection, National Gallery, Scottish National Gallery of Modern Art and the Victoria and Albert Museum. Hambling is known for her choice in painting the dead. She states that it is her way of grieving for those who are gone, particularly her way of coping with the death of those she held close like Henrietta Moraes, her mother, father in their coffins. Hambling tells NYTimes George Melly gave her the nickname of "Maggi (coffin) Hambling" and joked that this is the name she would be known by.

Her work is spurred through angerfor the destruction of the planet, about politics, for social issues. In 2013, she exhibited at Snape during the Aldeburgh Festival, and a solo exhibition was held at the Hermitage, St Petersburg. Hambling is frequently described as a controversial figure. Hambling is a Patron of Paintings in Hospitals, a charity that provides art for health and social care in England, Wales and Northern Ireland.

Please look at my other items including rare modern and contemporary art and design pieces. The item "Maggi Hambling CBE Original Abstract Painting Signed/Framed with provenance" is in sale since Thursday, October 3, 2019.