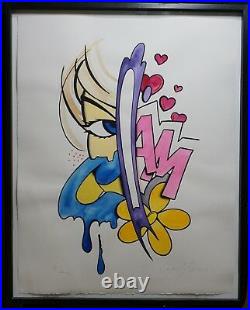 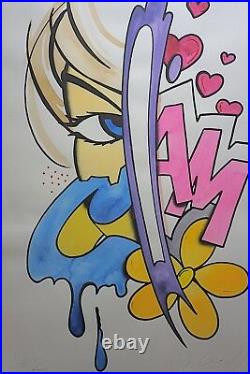 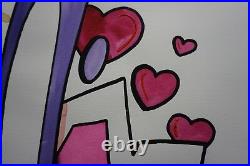 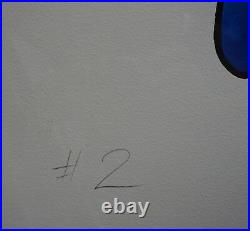 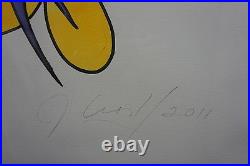 Medium: Original Mixed Media on Paper. This piece has been stored in a smoke free environment. We will get back to you within 24 hours Monday - Friday.

Please allow 1-2 days response on Saturday and Sunday. We appreciate your cooperation in this matter! John Matos, Bronx, New York, Oct. 11, 1961 is a graffiti artist.

As early as 13, John Matos was spray painting New York City trains, the full image art as opposed to simpler tagging soon transferred to silk screened canvas. He was first noticed through his murals on subway cars and dilapidated buildings, he is now regarded as a pioneer of the Graffiti art movement. His work is said to convey a "visual link between street life and established society". In 1980, Crash curated the now iconic exhibition:"Graffiti Art Success for America" at Fashion MODA, launching the graffiti movement that has remained very active through today. By the 1980s Matos had exhibits across the United States and abroad.

Galerie Yaki Kornblit was the first instrumental gallery in Amsterdam that help launch his career in Europe. In 1981 Crash, along with 10 other artists were chosen by The Public Art Fund to design animated imagery for The Spectacolor Billboard in Times Square. He was given his first gallery showing by Sidney Janis at the Sidney Janis Gallery in 1983. [1][3] Chase Manhattan, N. As well as CITIBANK, N. And other collections came calling. In 1984, Crash along with Keith Haring painted mural installations for the 5/5 Figuration Libre France/USA at the Musee d'art Moderne de la Villa de Paris. In 1988 he sprayed Notes in the Wind measuring 178 x 178 centimetres to be exhibited and eventually to be owned by the Peter Stuyvesant Foundation in Zevenaar, Netherlands. In 1995, Crash was commissioned by British American Tabacco to create a commission for Lucky Strike brand cigarette, joining fellow artist Keith Haring, to create a special work for this company and their collection. In 1996, Crash painted an Eric Clapton Signature Stratocaster and gave it to the artist as a gift. Clapton went on to use the specially designed guitar through his 2001 tour and later appeared with another. In total Crash has created 5 guitars for Clapton, though only three of them have made public appearances. Soon after Fender Musical Instruments commissioned the creation of 50 such graffiti designed guitars from Crash and named the line Crashocasters. Crash went on to also design a line of custom painted telecasters with match Fender amps. Other artists such as John Mayer have used the custom painted Crashocaster guitars. In July 2006, the pieces titled "Aeroplane 1" (1983) and "A-U-T-O-matic", (1985), along with other paintings from their permanent collection were displayed in the Brooklyn Museum of Art in a featured exhibit titled Graffiti.

In 2009, Crash held his first exhibition of painted guitars and guitar related artowrk in NYC. In 2010, Crash held a 30 year retrospective at Fairfield University's Walsh Gallery.

Crash was asked by Sanrio to create a series of paintings to be shown at Art Basel, Miami Beach, FL, featuring Hello Kitty and other characters from Sanrio's catalogue. Also, in 2010, Crash was commissioned to create a special limited edition luggage for TUMI, Inc. A painting was created and used for the design, which was released world wide in 2011.

This item is in the category "Art\Mixed Media Art & Collage Art". The seller is "fineartacq" and is located in Fort Lauderdale, Florida. This item can be shipped worldwide.