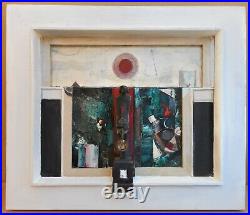 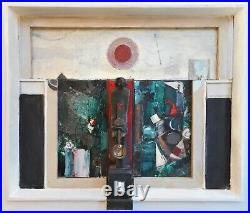 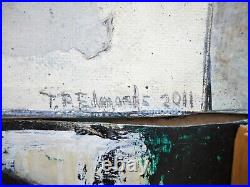 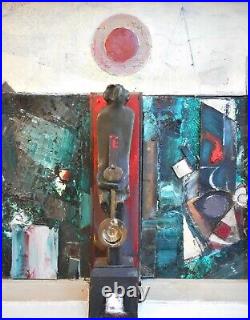 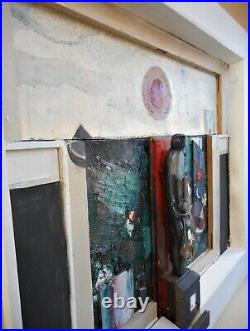 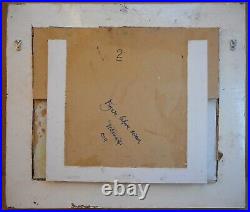 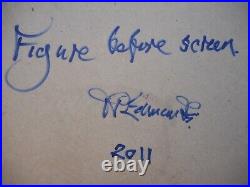 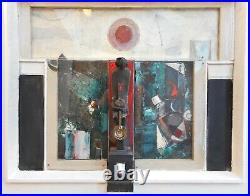 Integral white painted wood frame. There are also three Perspex panels and a Perspex'shelf', which I have removed for photography to eliminate the surface reflection, they have been replaced for the final image and the work will be delivered with them in place.

Painting in excellent original condition (see photos), frame in good condition (see photos). Size; 67.5cm x 79cm. This is one of a group of five works by the artist I have listed. British expressionist painter and sculptor. Trevor Edmands was born in Leeds, Yorkshire in April 1936. He was educated at West Leeds High School, then studied art at Leeds College of Art (1953 - 1957), followed by Leeds University (1957 - 1958). He has been widely exhibited in major galleries in the UK, Europe and the USA including; Leeds City Art Gallery, Wakefield City Art Gallery, Bradford Metropolitan Art Galleries, Mall Galleries, London, OBM Gallery, London, Medici Gallery, London, Edinburgh University Gallery, Durham University, Lothar Padden Gallery, Munster, Germany, Communale Civico, Camerino, Italy and Malton Gallery, Cincinnati, USA. He received the British Institute award for sculpture in 1987-88 and was an invited artist to The Kilkenny Festival in Millennium Year, where the art critic of The Irish Times wrote. Hughie O'Donoghue chose Edmands as the artist who had most influenced him. Edmands is one of those individuals who stands apart from the mainstream.

There is a visionary directness and honesty to his work, which encompasses painting, sculpting and writing. Much of it centres upon the individual human figure and is steeped in a sense and knowledge of art history and its almost religious air seems to be related to a spiritual, rather than religious air as such. It is rewarding and thoughtful work, unfailing attentive to his rich inner world. Having seen his work at the Mall Galleries, London, Daniel Brown wrote, in his two page article on Edmands for the American publication'Arts Academy News' "The single best Expressionist work that I have seen by a living artist" and went on to say that it was not however Expressionism that defined Edmands' works as the inventiveness, variety and sheer quality was'astonishing. Robert Clark, The Guardian, Saturday 20 October 2007.

Trevor Edmands comes across as a maverick whose paintings are proudly out of step with the contemporary mainstream. Wielding the century-old techniques of post-Impressionism and early expressionism, Edmands' fellow spirits might be Pierre Bonnard or Georges Rouault (or, indeed, Joash Woodrow).

While this leads some to dismiss him as a retrogressive traditionalist, there is something aesthetically and emotionally resonant about his work. The renowned painter Hughie O'Donoghue has stated that Edmands influenced his development more than any other artist. Edmands' brushwork is bold and gutsy enough to seduce the viewer's attention, but his use of deeply saturated colour enables his images to penetrate the memory. This item is in the category "Art\Paintings".sayer" and is located in this country: GB.