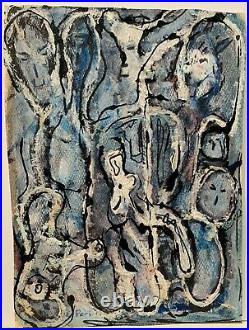 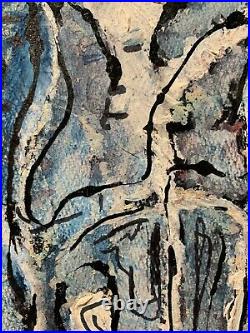 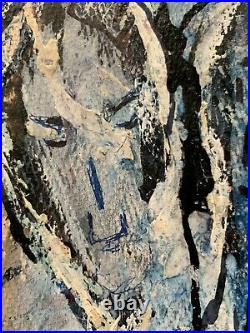 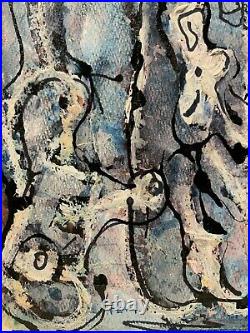 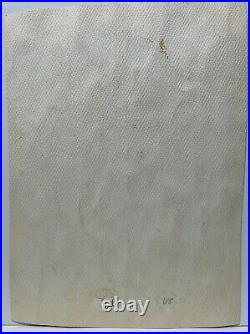 Estate stamp on on back side. Born in Bangor, Maine, Eve Peri worked predominantly as an abstract fiber collage artist, creating embroidered compositions, wash drawings and paintings. A modernist who favored rich patterns and organic forms, Peri cut and assembled found textiles gathered from travels around the world.

She lived and worked in New York, Mexico and Philadelphia with extended stays in London, Lisbon, Paris, and Rome. At a very young age, Peri learned embroidery, appliqué, stitching and quiltmaking techniques from her mother and aunts.

1897 Born in Bangor, Maine to George Perry and Minnie Alpine. There was an early marriage and divorce. 1931 Lived in Mexico with her second husband Alfonso Umana Mendez, a designer for Fred Leighton.

1948 Miscellaneous Textiles, Addison Gallery of American Art, Phillips Academy, Andover, MA; group exhibition with Ethel Beam, Florence Satsman exhibiting 27 works by Peri. Two exhibitions grouped under the same title: Silk Prints manufactured by the Onondaga Silk Company along with the American paintings on which they were based and an exhibition showcasing projects from various schools done by students of all ages. 1948 Studio visit with Alexander Kostellow, chair of Industrial Design Department at Pratt Institute, who then writes an essay on Peris work for her solo exhibition at the Philadelphia Art Alliance. 1948-49 Eve Peri: Fabric Forms, Gallery E, Philadelphia Art Alliance, Philadelphia, PA. 1949 Saved Thomas Manns article on Goethe.

Third review, The New York Times, April 18, 1950; highlights Red Space. 1951 American Institute of Decorators, 1951 Citation of Merit; given for abstract machine embroidery and appliqué on fabric; article by Betty Pepis, Trial by Jury, The New York Times Magazine, March 23, 1952. All products juried were offered for consumer sale no later than January 1, 1951. Peri was among 12 winners chosen from several hundred entries.

Article describes jury process and illustrates winning designs. Peri won a citation for novelties. There were six of these [citations], and they were commended by the judges as much for their originality of concept as for their excellence of design. 1952 Alter Ego: Masks: Their Use and Art, The Cooper Union, New York, NY; review, 200 Changes of Face, from unknown magazine. Modern masks included those by Margaret Severn (a Follies dancer), Julio de Diego, James Light (designs for The Great God Brown).

Eve Peri is mentioned as follows: We can only admire the indomitable creative spirit which made Eve Peri concoct the gaily-woven face across the way when confined for a week to a Lisbon hotel with a fierce siege of the hives. [Mask to Hide the Blotches of Hives].

Mentions a mask [A Mask to Hide the Blotches of Hives] that received favorable mention the Cooper Union Gallery in New York and that later, two of four fabrics she designed for interior decoration won prizes at the American Institute of Decorators ShowNew York. Goes on to say that those fabrics were later exhibited at the Good Design Show in Chicago. Dealers listed: Arundell Clark, New York and Stanley Wollner, Philadelphia.

1956 Watson and Boaler, Chicago, IL; group exhibition with Karl Mann (seed mosaics) and Ruth Asawa (wire sculpture). Peri exhibited appliquéd and embroidered wall hangings, both non-objective and folk-style. The renovation of the new offices on the second, third and fourth floors was noted for its radical use of color in 3 articles in Philadelphia newspapers.

The palette of 38 colors including sharp blues, gold, lemon yellow, persimmon, green, light orange and the rest was warmly embraced my the employees. All the articles are careful to note that 80% of the workers were women. 1953-58 Living at East Meehan Avenue, Mount Airy, Philadelphia. 1957 Wall Hangings and Rugs, The Museum of Contemporary Crafts, New York, NY; Gallery publication lists 16 artists.

Kuhn Library & Gallery, The University of Maryland Baltimore County, Baltimore, MD; exhibited 43 works of varied media. These Mexican Travel Tips by the Floor Covering Editor Will Keep Going for Some Time. Recounts meeting with Umana, Fed Leightons designer in Mexico, at the Leighton house in Tlaquepaque and a party there for Witter Bynner, the poet that was attended by John McAndrew (formerly of the Modern Museum) and Eve Peri, an American designer, [who] told you in vivid phraseology about life in Mexico. [find copy of entire article and full citation].

Notations in Needlework, House & Garden, May 1946. Illustrates in one photograph seven designs including a Mexican Colonial lion and a wall hanging that resembles The Three Kings, watercolor on tissue. A Mexican cock fight seen on her travels inspired New Yorker Eve Peri, needlework artist, to design this self-confident cock, done in a veritable potpourri of stitches on linen for a pillow cover. Although this is an example of painstaking work, the amateur could achieve equally striking effects, for none of the stitches are complicated ones. Its beauty is in its improvisation, its true originality.

Abstract Embroideries, Harpers Bazaar, January 1947. These are the newest expression of Eve Peris talent with fabrics. Made to order, they are executed in various techniques. One of the handsomest is an arrangement of grays and browns in many tones and surfaces, appliquéd to an off-white linen ground, with a black yarn rope embroidered over all, as if thrown there. These are worthy of framing, though some designers use them as fabric.

Robsjohn-Gibbing has made them into magnificent pillows. Bardsley, Lucinda, Applique Inspired by the Past, Womans Day, February 1947, pp.

Commissioned project for new designs by Peri based on heirloom holdings of the Metropolitan Museum of Art. Peri created drapes and a cushion (based on a 19th-century, New England appliquéd rug), a bedcover and headboard (based on a 18th-century, American chest), and six paneled screen (based on 18th-century door and side panel). Directions for designs available on request from Womans Day in a leaflet, Appliqué Inspired by the Past. Nowadays complicated embroidery just doesnt go down, unless it is indispensable to the good looks and usefulness of the object. The simple stitching and appliqué of this pillow top by Eve Peri reflect unfussy modern taste. The pattern, no cut-and-dried cliché, is a custom design. Tomorrows Heirloom, Womans Day, June 1947, p. Crocheted afghan design, directions for making given in the HOW TO Section, pp. Since the Zengs believe in double-purpose rooms, the bedroom serves nicely as an extra living room.

The bed, tailored to look like an overflow sofa, holds a flock of overflow guests. Modern needlework pillows and picture by Eve Peri.

16, cover of Features for Women section. Find good copy of entire article. Both copies in files are damaged. Needlework Paintings by Eve Peri on View at Art Alliance Through Jan.

Gillies, Mary Davis, Its Straw, Midnight Blue and Coral, McCalls, April 1949, pp. Illustrates a wall hanging by Peri. This lovely desk, which also serves for dining, might be called and extravagance, but it too is an investment. Like the other blond woods, it repeats the straw tones. The Eve Peri wall hanging is a modern sampler of appliqué and lazy-daisy stitches.

Cut-out Fabric Montages, Interiors and Industrial Design, July 1949. Illustrates In the Beginning, an appliqued wall hanging that has been exhibited in a number of museums. Peris Needle, Flair, March 1950, p. Briefly highlights her career and illustrates several designs. Includes photo of Peri holding Mask to Hide the Blotches of Hives.

Pepis, Betty, Trial by Jury, The New York Times Magazine, March 23, 1952, pp. Discusses jury process for the American Institute of Design Awards and illustrates Peris fabric design that won in the Novelties category with five other designs, commended by the judges as much for their originality of concept as for their excellence of design. The New Yorker, May 10, 1952.

Artist Designs Sculptured Fabrics, Germantown Courier, Thursday, October 2, 1952, vol. Begins, Perhaps you are one of the millions who look upon impressionistic art with a bewildered eye, wondering what the artist is trying to say, or if he is trying to say anything at all? If that is the case, perhaps you need to sharpen your appreciation of the beauty that can be seen in harmonized color and form. Or perhaps you should see the sculptured fabrics of Eve Peri. Mentions recent small exhibit on display in Germantown at the request of Germantown Friends Library. Barnes, Barbara, Take Up Needlework, Designer Urges Women of the U. Reports Peri lecture at a meeting of the Philadelphia Home Fashions League, after 1953. Colors Found to Aid Work, 1956, p. Includes photo of Peri with Wanda Norstrom, other designer. In file copy, Peris image is cut out.

Direction for making embroideries given in magazine on p. Market Spotlight, Interior Design, February 1966, p. Handcraft of Rare Quality subtitle for Peri section that states, Paul John Smith, Director of the Museum of Contemporary Crafts, feels [Peris fabric work] is of such rare quality that it deserves a place in its permanent collection. Because of the Museums practically non-existent budget, he is hoping some philanthropic souls will come to its aid.

The item "Eve Peri c. 1960 Abstract Expressionism painting NYC Modernist woman artist" is in sale since Tuesday, July 27, 2021. This item is in the category "Art\Paintings". The seller is "citypictures" and is located in Hudson, New York.