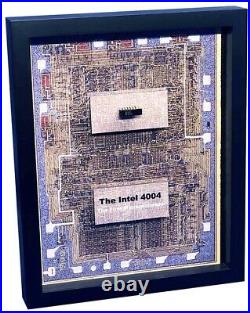 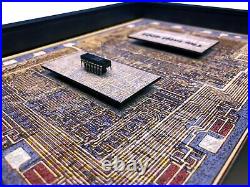 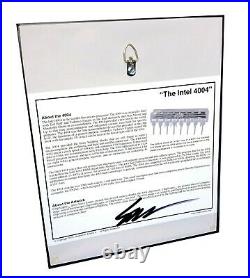 The Intel 4004 is the world's first microprocessor. We are fast approaching the 50th anniversary of the microprocessor, November 2021. The 4004 was created by Intel with Ted Hoff and Federico Faggin as the lead designers and Stan Mazor and Masatoshi Shima as co-contributors. The 4004 provided a new tool to the world. Up to that time semiconductors and integrated circuits were built for specific purposes.

The 4004 was the first semiconductor device that provided, at the chip level, the functions of a general purpose computer. Federico Faggin signed the 4004 with his initials, FF, which can be seen at the lower right side of the 4004. The 4004 provided the basic building blocks that are still found in today's microcomputers: the arithmetic and logic unit and the control unit. The 4-bit Intel 4004 ran at a clock speed of 108 kHz and contained 2300 transistors. It processed data in 4 bits, but its instructions were 8 bits long. The 4004 addressed up to 1,024 bits of program memory and up to 4,096 bits of data memory.

It had sixteen 4-bit (or eight 8-bit) general-purpose registers, and an instruction set containing 46 instructions. The Intel 4004 was a Harvard architecture microprocessor with separate program and data address spaces. The program data for the 4004 was held in the Intel 4001 ROM (Read Only Memory). The 4001 had 2048 bits of memory.

It was organized as 256 8-bit words. The 4004 could address 16 4001s at a time, for a total of 32K-bits of ROM. The 4004 also supported two banks of 4001s, doubling the ROM. In addition to its storage functions, the 4001 had control logic to provide communications for the 4004 with other peripheral devices through 4 I/O lines. The 4004 chip die was 1/8th inch wide by 1/6th inch long. This small microprocessor had more computing power than the first electronic computer, the ENIAC, which occupied 3,000 cubic feet and weighed 30 tons. Intel P4004 included in this artwork is fully functional. The artwork is framed in an 8"x10" black shadow box frame, with glass. All framing materials are acid free. A narrative about the artwork that includes the artists signature is placed on the back of the artwork. Limited by availability of chips. Want to see more ChipScapes? Also please check out my ChipScapes. Computer chips start out as ordinary sand, which is silicon dioxide.

However, the silicon must be made very, very pure. The first step is to melt the sand, in a furnace that reaches about 3200.

The Silicon Carbide is processed in a trichlorosilane distillation method to create 99.9999% pure silicon called polycrystalline silicon. The polysilicon is broken up into chunks. These chunks are melted in a crucible at about 2500.

A silicon crystal seed is dipped in molten silicon and slowly drawn out to create a cylinder of silicon. These silicon cylinders are some of the purest crystals on the planet. Once the silicon cylinder is grown to the desired diameter, it is sawed into wafers. These wafers are polished to achieve a very flat mirror surface. Transistors, and other micro-electronic parts, are built on the polished wafer in layers in a process called etching. The wafer is then sawed into its individual chips. Each chip is mounted in an electronic package that serves to protect it and connect it to the outside world. It has been said that computer chips are the greatest value added product in the world. We essentially take a pile of sand and change it into thousands of dollars worth of computer chips. These artworks are the creation of. Are photographs taken of computer chips, boards, and other computer artifacts. They are sort of chip landscapes, or. Most often a macro-lens or microscope is used with special lightning to achieve these unique artworks. Intel, IBM, Fairchild, DEC, Signetics, Intersil, AMD, Zilog, Motorola, MOS, NEC, Texas Instruments, are some of the great chip making companies. Chips like the Intel 4004, MOS 6502, Zilog Z80, AMD 2901, IBM PowerPC and others have changed the way people work and play. Are dedicated to preserving and sharing these computing and communication technologies that changed the world. Artworks are fine collectible artworks. Come is a variety of shapes sizes and colors. Clusters of my artwork make for stunning displays! Would make a great gift for the nerd, geek, engineer, programmer, IT executive, or just that technology savvy person in your. If you are interested in art on a subject or chip that you don't see listed, please message me. I have hundreds of artwork and cannot keep them all listed. Also, I do custom artworks. If I think it will be of general interest, the pricing will be similar to what you see in my store.

If it is very specific to your interests the pricing will be higher, since I can't spread the development costs over multiple sales. For more information about ChipScapes. Please check out my ChipScapes. For more information about chip collecting as a hobby. The item "ChipScapes Intel 4004, The World's First Microprocessor P4004, Computer Art" is in sale since Saturday, October 23, 2021.