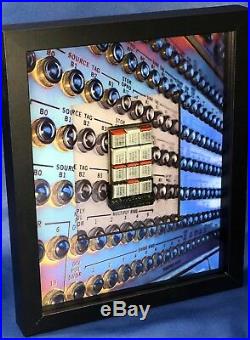 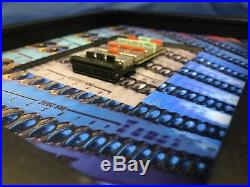 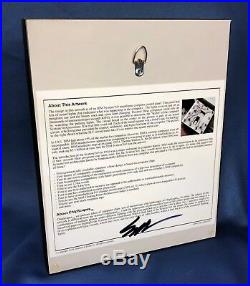 The image in this artwork is of an IBM System/360 mainframe computer control panel. This panel had lots of round lights that indicated what was happening in the computer. The lights went on and off as programs ran and the binary ones and zeros kept changing. Because these computers could only do thousands of instructions per second (KIPS), it was possible to determine the "health" of the computer by watching the pulsing lights. The circuit board in the center of the picture is part of an actual System/360 processor. It is over fifty years old. Each of the metal squares was a Solid Logic Technology circuit, which together provided the control, arithmetic, and logic functions of the computer.

The picture to the right shows what the SLT circuit looks like if you remove the square metal can. In 1961, IBM had about 65% of the market for computers. However, IBMs existing computers were all incompatible. IBM needed a new approach to computing if it was going to gain, or at least hold on to, its market share. IBM needed to step up its game.

The artwork is framed in an 8"x10" black shadow box frame, with glass. All framing materials are acid free. A narrative about the artwork that includes the artists signature is placed on the back of the artwork. Limited by availability of chips.

Just add all your items to the cart, and then checkout. Want to see more ChipScapes?

Also please check out my ChipScapes. Computer chips start out as ordinary sand, which is silicon dioxide. However, the silicon must be made very, very pure. The first step is to melt the sand, in a furnace that reaches about 3200. F, and mix with carbon. This first purification process creates 99% pure Silicon, a common output is Silicon Carbide. The Silicon Carbide is processed in a trichlorosilane distillation method to create 99.9999% pure silicon called polycrystalline silicon. The polysilicon is broken up into chunks. These chunks are melted in a crucible at about 2500. A silicon crystal seed is dipped in molten silicon and slowly drawn out to create a cylinder of silicon. These silicon cylinders are some of the purest crystals on the planet.

Once the silicon cylinder is grown to the desired diameter, it is sawed into wafers. These wafers are polished to achieve a very flat mirror surface. Transistors, and other micro-electronic parts, are built on the polished wafer in layers in a process called etching. The wafer is then sawed into its individual chips.

Each chip is mounted in an electronic package that serves to protect it and connect it to the outside world. It has been said that computer chips are the greatest value added product in the world. We essentially take a pile of sand and change it into thousands of dollars worth of computer chips. These artworks are the creation of. Are photographs taken of computer chips, boards, and other computer artifacts.

They are sort of chip landscapes, or. Most often a macro-lens or microscope is used with special lightning to achieve these unique artworks.

Are dedicated to preserving and sharing these computing and communication technologies that changed the world. Artworks are fine collectible artworks. Come is a variety of shapes sizes and colors. Clusters of my artwork make for stunning displays!

Would make a great gift for the nerd, geek, engineer, programmer, IT executive, or just that technology savvy person in your life. For more information about ChipScapes.

Please check out my ChipScapes. For more information about chip collecting as a hobby. The item "ChipScapes IBM System/360 Processor Card Mainframe, SYS/360, Board" is in sale since Friday, September 13, 2019.