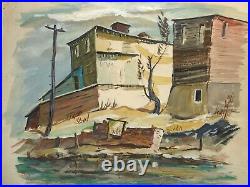 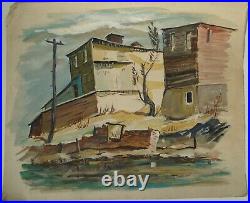 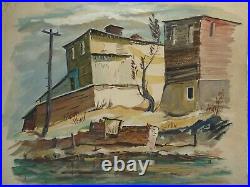 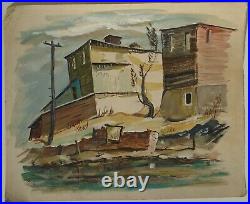 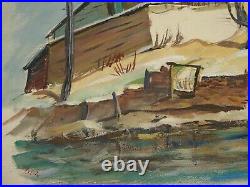 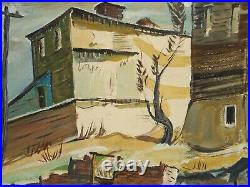 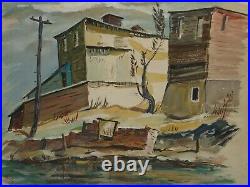 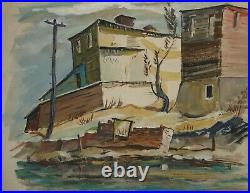 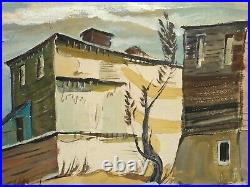 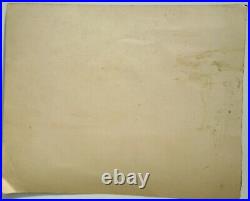 This is an 12 1/2 by 15 inch mixed media (oil & gouache) painting on paper depicting the backs of houses near what looks like a stream or body of water. It is in very good to excellent condition. See the above condition report. Born in Codroipo, a small village only a few miles from Venice, Italy in 1905, the son of a stonemason. Bosa emigrated to the U.

At age 18 after studies at the Accademia della Belle Arti in Venice and became an American citizen. He then studied under John Sloan, of the Ashcan School, at the Art Students League in New York. A distinguished painter, Louis Bosa's work has been likened to that of artists ranging from Pieter Breughel the Elder to one of his mentors John Sloan and the Ashcan School. His style was, however, distinctively his own. Bosa was a close observer of the human condition.

His paintings, which are in all media including primarily oil but also gouache, watercolor, ink, etc, often focus on people and street scenes from his native Italy and New York neighborhoods as well as rural scenes from and around Bucks County, Pennsylvania. Bosa was known to have followed his subjects, making many sketches and mental notes, and combining his observations in the final work to create visionary, whimsical, fantastical images. The subjects of his paintings are highly stylized and expressionistic, and often border on caricature. "People are so funny at times they are sad, " he said: The people in his paintings are accessible and portray human emotion and everyday life, conquering such concepts as mortality, humility and sometimes futility. His work often reveals comedy in the midst of tragedy. Many of his paintings include whimsical images of nuns riding bicycles, monks flying and similar authority figures engaged in mundane activities. He painted the streets and characters of the city, including many of New York. His artist friends included Jackson Pollack, Robert Philipp and Isthak Holtz, to name just a few.

He died in Doylestown, Pa. The item "Behind the Houses Mixed Media (Oil & Gouache) Painting-1930s/40s-Louis Bosa" is in sale since Saturday, March 9, 2019. This item is in the category "Art\Paintings".