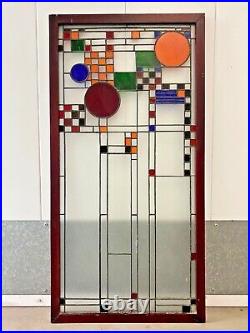 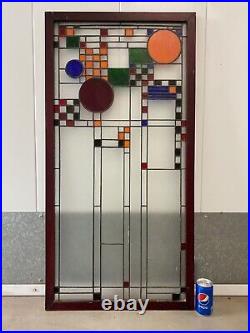 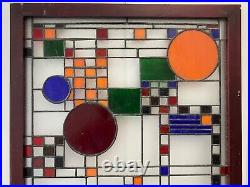 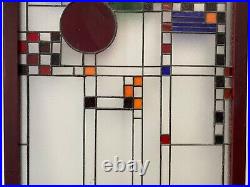 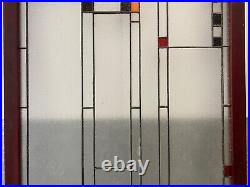 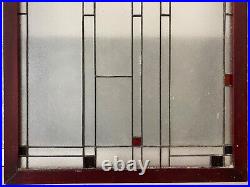 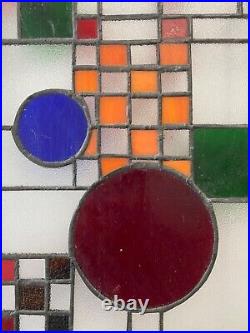 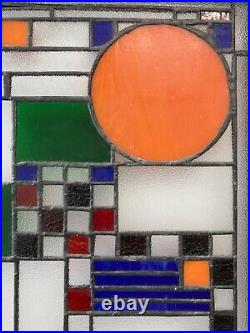 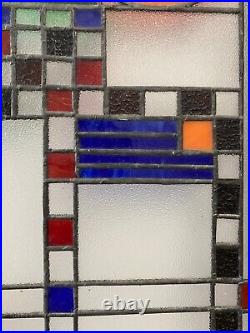 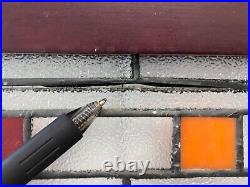 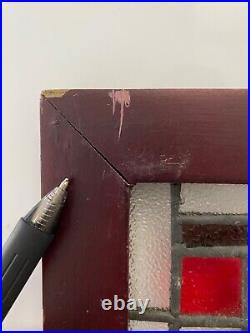 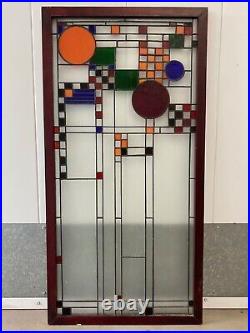 This is a beautiful and well-made Antique Vintage Arts & Crafts Stained Glass Window, modeled after the famous Frank Lloyd Wright window commissioned for the Coonley Playhouse in Riverside, Illinois. Good condition for age and use, with some minor scuffing and scratches to the original period frame, and one small area where the lead does not fully connect the glass. This is essentially an imperfection, and not a condition issue. Approximately 20 1/4 x 40 1/2 inches including frame.

This beautiful piece may have been commissioned as a replacement for the originals, if they were ever to break. Unfortunately I do not have much history on this artwork. Acquired from an abandoned storage locker in Los Angeles, California. Please check out my other listings for more wonderful and unique artworks! Frank Lloyd Wright's Leaded Glass.

No other architect or designer of the modern era transformed the use of leaded glass in architecture as Frank Lloyd Wright. Creating ribbons of uninterrupted glass casement windows and doors in his Prairie style buildings, Wright conceived his windows as an integral part of his organic design. Known for their extensive use of clear glass with touches of color, the glass designs are all geometric abstractions unique to each building for which they were created. Wright called them light screens.

The sources for Wright's glass designs range from the Froebel gifts of his childhood, to Louis Sullivan's flat ornamentation, to the designs of the Vienna Secession. But it was Japan that dominated Wright's early aesthetic - the flat areas of color enclosed within black lines in the Japanese prints that he admired and the way in which the sliding shoji screens of indigenous Japanese architecture unite exterior and interior space. Wright stated, I was working away at the wall as a wall and bringing it towards the function of a screen, a means of opening up space. Wright's light screens illuminated his interiors with natural light, touched by the autumnal dashes of his color palette and animated by his exquisite visual geometries.

Wright's buildings follow the geometric principles he imposed on each project, and his glass designs also express the geometry that unites the building. Between 1885 and 1923, when he stopped using leaded glass, Frank Lloyd Wright designed 163 buildings - of which 97 were constructed - that included leaded glass of his own design. Among Wright's most significant glass programs from the era of his Oak Park Studio are the Ward W. Willits House (1902-03), Susan Lawrence Dana House (1902-04), Darwin Martin House (1903-05), Unity Temple (1905-08), Avery Coonley Complex and Playhouse (1907-08-/1911-12), and Frederick C. Robie House was Wright's last and greatest Prairie-style house and includes some of his best-known windows.

Wright designed 175 doors and windows for Robie House of which 163 original casements remain in the house today. The living room and dining room of Robie House are visually united into one continuous space by a 47-foot span of 24 leaded-glass casement doors opening to a narrow balcony that extends across the length of the south façade. Wright's window designs were a primary feature of his Prairie style, an expression of his creative intelligence, prolific imagination and passion for beauty. Subsequently Wright's more vibrantly colored window designs for the Coonley Playhouse (1911-12), Midway Gardens (1913-14), and Emil Bach House (1915) reflected his exposure to contemporary modernist art movements such as Orphism and Synchromism. Hollyhock House (1916-21) was the last project for which Wright designed a complete program of leaded glass.

Window from Coonley Playhouse, Riverside, Illinois. This colorful, whimsical triptych window is from the Avery Coonley Playhouse, a small structure that Frank Lloyd Wright designed as an addition to the Coonleys' suburban Chicago estate, which he had previously completed in 1908. Louis Sullivan's foremost student, Wright continued his teacher's search for an indigenous American architecture.

Like Sullivan, Wright drew inspiration from nature and natural forms, and both men were pioneers of the Prairie School of architecture, characterized by low-slung, horizontal lines and rambling, open spaces that reflect the gently rolling landscape of the Midwest. Odes to the middle-class American family at the turn of the century, Wright's residences are organic, designed not only to adapt to a family's changing structure but also to contain the sense of a unified and harmonious whole. Every detail of the Coonley complex, like all of Wright's projects, bore his personal imprint, down to the creation and placement of the furniture and the design of this window. Referencing such Americana as the flag and colored balloons, Wright explored the use of glass both as a transparent screen uniting exterior and interior and as a decorative element, the colors and design of which anticipate the later abstractions of Piet Mondrian. This item is in the category "Art\Paintings".