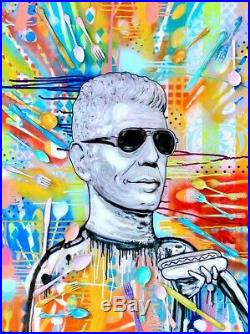 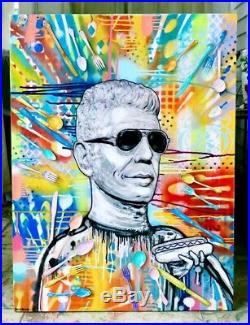 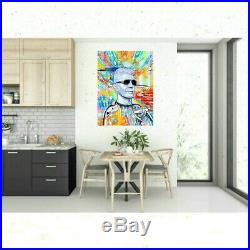 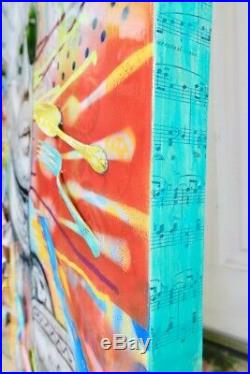 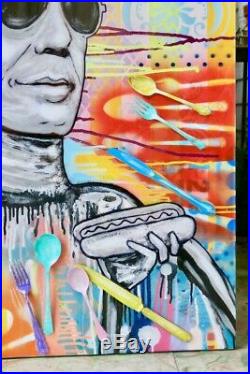 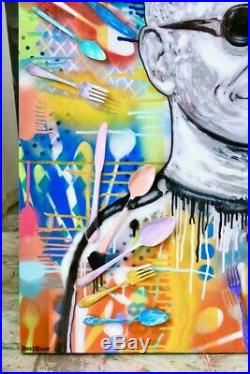 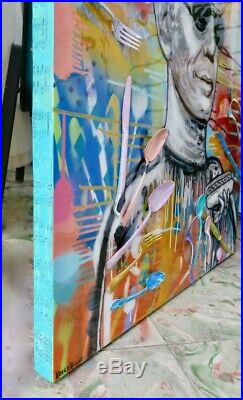 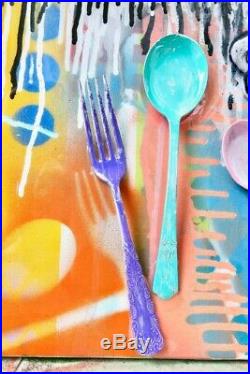 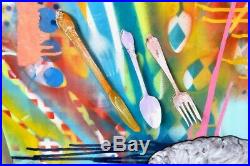 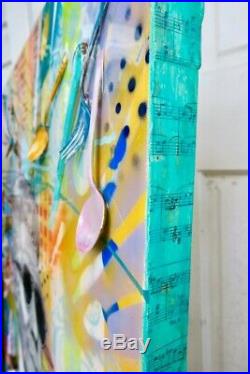 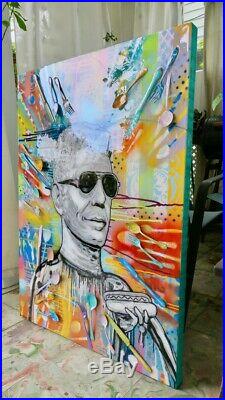 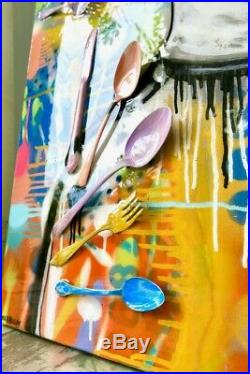 1982 won his first art award at the age of 12 with the'Connecticut Scholastic Art Awards Program' for a drawing entitled'Holocaust'. In 1996 he drew several drawings of the first teacher-in-space, S.

Christa McAuliffe, and gifted them to her mother, which now hang in the Christa Corrigan McAuliffe Center in Framingham, MA. A huge fan of X-Men and Marvel Comics, he began to study the art of drawing in his free time and soon became obsessed. Throughout his early life he experimented in different artistic mediums, but it wasn't until 2003, that his art became more of a fullon passion. Aside from abstractand 3D works on canvas, he often utilizes artifacts from the 18th - 19th century into his pieces such as sheet music, engravings, clock parts, musical instrument parts, photogravures, skeleton keys, and anything else he can get his hands on.

During that time, he was also commissioned by Galerie Lareuseto create a collage of the 100th anniversary of Washington D. S University Club, which now hangs in their lobby. Several of his pieces are in world-reknowned chef Gerry Garvin's restaurant in Hollywood & he participated in a group show in NYC featuring works by Yoko Ono. In the summer of 2010 his painting of "Washington, DC: Night in the City Series" was chosen to be featured in the national calendar for the American Civil Liberties Union (ACLU). During that same year he painted a portrait of Warhol SuperstarHolly Woodlawn, and gifted it to her during her DC performance with Ganymede Arts. In 2012 a piece by Kelley was given as a gift to the former king of Spain, Juan Carlos I. Having moved from Connecticut to attend the George Washington University, he had been living in D. Heassisted in the art estate of Eunice Shriver, and many other private collections in the DC area. Hecurated three solo exhibitions in Washington, DCfor MacAurthur Fellow Recipient, Elizabeth Turk. Throughout the years he has donated manyartworksto The Trevor Project, Easter Seals, Washington DC Humane Society, City Dogs Rescue, Washington Animal Rescue League, Thrive DC, Ross Elementary, Human Rights Campaign (HRC. Org) National Dinner, Whitman Walker Clinic's Art for Life, and Georgetown Hospital's/Four Season's Georgetown Jingle & Annual Golf Classic Fundraiser.

He currently resides in Key West, Florida, where he continues to create new works and trade fine art;and is an active member of The Arts Council Of The Florida Keys, The Anne McKee Art Fund, and The Studios of Key West. In the fall of 2017 he created "The Time Travelers Of Key West" poster and donated all the proceeds to Hurricane Irma victims via Sister Season Fund & the Florida Keys SPCA.

Artist's Statement: I often use salvaged antique items from the 19th and early 20th century such as sheet music, piano parts, postcards, keys and clock parts and many other items to create abstract portraits and compositions. All of my work is coated in an epoxy resin, giving the artwork a glass-like appearance. One of my favorite artists, Jill Scott, said I think, as an artist, you have to experience some deep turmoil, some kind of pain, because that's what connects you with the world. That's what makes it juicy! --- and I could not agree more.

Having lost my father at 16 made me realize that life is short and you should do what you love. Creating art has always been a passion of mine, and I have been following that dream ever since.

Thank you to all those who have supported my work throughout the years. The subject matter, all portraits of women, provides an early tip-off to the play's Sapphic theme.

Will feature a new collection of whimsical mixed media paintings by local artist Kreg Kelley. To celebrate Kregs new works, SALT will be hosting an opening reception at the gallery from 6 to 8 p. A Key West-based artist as of summer 2013, Kreg won his first art award at the age of 12 with the Connecticut Scholastic Art Awards Program for a drawing titled Holocaust. Throughout his teenage life he experimented in different artistic mediums, but it wasnt until 2003 that his art became more of a full-on hobby. Aside from abstraction and 3D works on canvas, he incorporates damaged antique engravings and artifacts from the 18th and 19th century into his pieces.

Several of his pieces are in world-renowned chef Gerry Garvins restaurant in Hollywood and he participated in a group show in NYC featuring works by Yoko Ono. In the summer of 2010 his painting of Washington, DC: Night in the City Series was chosen to be featured in the national calendar for the American Civil Liberties Union. Kregs works hang on walls across the world including Amsterdam, Canada, Brazil, Greece, Denmark, Norway, Russia, Australia, France, Japan, Italy, Spain and the U. Most notably, his works hang in the homes of the former King of Spain, Doc Rivers and actress/comedian Jane Lynch. Upon moving to Key West, Kreg immediately became an active member of The Florida Keys Council of the Arts. The Anne McKee Art Fund and The Studios of Key West. Although he spent many years living in urban areas, Kreg has adjusted quickly to island life. One of the main reasons I moved to Key West was to focus on my work and the tropical beauty of Key West is not only relaxing but also conducive to my creative process, Kreg explains.

Was a fantastic part of my life, offering some of the best inspirational art in the world at the Smithsonian Institution or the Philips Collection, the island life is much more my cup of tea. I prefer the stop and smell the roses way of life, and this environment is perfect for that. What I love most about Kregs pieces is the juxtaposition of the old and the new, says gallery owner Laura Richardson. The way he utilizes salvaged antiques overlaid with modern artistic techniques is absolutely fascinating and unique. Weve never featured anyone like Kreg at SALT and we are so excited to expose more of the island to his incredible masterpieces.

I will be showing mostly new works at SALT while still involving my classic elements of antiques mixed with acrylics, Kreg describes. This series is much more influenced by Key West and island life, with an array of subjects like antique postcards of Key West, flowers, sea and marine life. Also touching on the theme of Time Flies, many of the pieces feature antique clocks from the 1800s. Kelley came to DC from Connecticut to study political science at George Washington University and pursue a career in politics.

Before graduation, he changed his goals and decided he wanted to do something I loved, something I would want to do for the rest of my life. For Kelley, that something was art.

Before he graduated, Kelley left George Washington to take a job at Galerie Lareuse in Georgetown, an opportunity I couldnt refuse. That opportunity turned into a long career, and Kelley now works as a curator at the gallery. He considers himself lucky to be constantly surrounded by the greatest artists ever and feels motivated and inspired everyday. As he works on restoring the pieces, he relishes the chance to touch and examine their details so intimately. Like many of the great masters whose work he handles on a daily basis, Kelley finds inspiration from his neighborhood and city. Kelley has lived in the neighborhood for almost 10 years and has enjoyed being a part of its growth and change.

Lautrec is the best example, he says, of the way he incorporates the creative influences of his surroundings in his own work. I have the best view from my apartment. A view, he adds, that he painted in Night in the City Series: Washington DC, the 2010 ACLU National Calendar Contest Winner.

His greatest source of inspiration continues to be his audience. Peoples reaction has been my biggest fuel to keep on creating, he explains. Although he has works across the nation, many of his pieces hang in the Borderstan area. My first paintings, works of canvases, are all on the same five- or ten-block radius.

Kelleys commitment to charity underscores his connection to the community. Its hugely important to give back to your community, especially when you have your own business and you can be in a position to give back. Im fortunate to do that.

This year, he has transitioned from donating single works of art to splitting a set percentage of all proceeds among four charities. Most of all, Kelley says he loves knowing that I can make people happy, touch peoples lives, and know that what Ive done is going to be enjoyed long after Im around. He sees art as a way to give back to the world and make the world a better place to live in. You have to do what you love. When you do what you love, everything else falls together. __________________________ "Taking a Risk and Sharing the Reward" Borderstan Interview, 2013 Kreg D. The item "Anthony Bourdain Eat Well Original Painting Pop Modern Signed Art Chef Cook" is in sale since Monday, November 4, 2019.