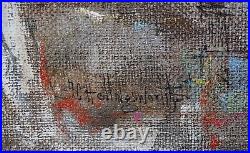 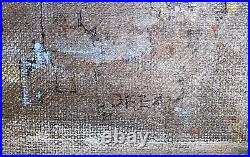 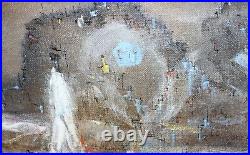 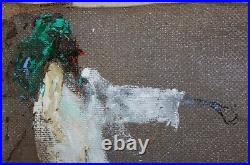 Dealsrus is well known for offering quality artwork at reasonable prices. Our reputation is stellar and we stand behind everything we sell. 20th Century African American/New York Modernist best known for his. Figure subjects and comic illustrations.

Beautiful composition by Alvin Hollingsworth! This painting depicts a panorama of ethereal dream imagery. This is a fine example his work in very good condition for its age. Alvin Hollingsworth, comic-strip illustrator and painter, was born in New York City and began drawing at the age of four, and by the time he was twelve, he was an artist assistant at Holyoke Publishing Company for Catman's Comics.

A year later he was doing illustrations for Crime Comics. His paintings dealt with themes of contemporary social issues such as the Civil Rights Movement, women's struggles, spiritual concepts, jazz, city life, time and space and dance. He was also a mural designer, author, poet, and lecturer. He graduated from the High School of Music and Art in New York City and then graduated Phi Beta Kappa from City College of New York with a fine arts degree. He later did graduate work. NBC network hired him to tour the East Coast lecturing and demonstrating painting and to host a ten-part series, You're Part of Art. As a result, he became a widely known figure in the art world. By 1953, he was creating his own comic strip that was nationally syndicated by the Associated Press in one-hundred forty newspapers. From 1980 until his retirement in 1998, Hollingsworth was a full Professor of Art at Hostos Community College of the City University of New York.

100% Guaranteed to be as described. We ask for your patience and assure you we are acting as quickly as we can. All lots are accompanied by a name and/or description and lot number for reference.

An approximation can be provided beforehand if requested. Thank you for your cooperation in the matter. EastCoastArt (AKA dealsrus) warrants the authenticity and authorship of our merchandise. All lots are guaranteed to be as described. Prospective buyers are responsible for asking any and all questions about the merchandise, and to view all photos carefully, before purchasing.

Should a dispute arise over the authenticity, it is our policy to have the purchaser obtain at their expense, an opinion (or two, in some cases and at our discretion) of recognized experts in the field, mutually acceptable by both EastCoastArt and the purchaser. We try to depict the merchandise and artwork as accurately as possible with photographs.

We do not overly enhance the photos. However, every computer and monitor is different, and how we see the merchandise might differ from what you see. Please bear this in mind when viewing. Contact before purchasing for any questions you have. Unless otherwise specified, frames are considered a throw-in and are not guaranteed in any fashion. Sizes listed in the descriptions are a very close approximation, ie. If the painting is 12.2 x 14.2 we would describe such as a 12 x 14. The item "ALVIN HOLLINGSWORTH-Black NY Modernist-Original Signed Mixed Media-Surreal Dream" is in sale since Monday, June 4, 2018. This item is in the category "Art\Paintings". The seller is "dealsrus" and is located in Pottstown, Pennsylvania. This item can be shipped worldwide.