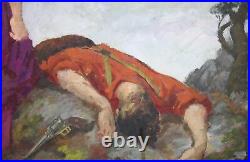 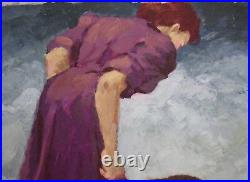 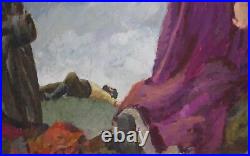 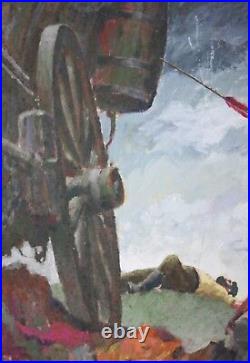 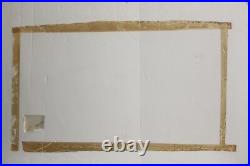 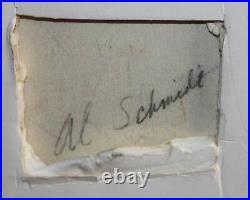 Dealsrus is well known for offering quality artwork at reasonable prices. Our reputation is stellar and we stand behind everything we sell. Early 20th Century Chicago Impressionist best known for his T. Onalist and Impressionist landscapes and still life paintings.

This painting depicts a dramatic Western illustration in the aftermath of a scrimmage. Schmidt was best known for his genre paintings. This is a fine example of his work in great condition for its age. Albert Schmidt was an early member of the Santa Fe art colony, best known for his high-key modernist landscapes.

Schmidt was born in Chicago, the son of a physician. He attended the Art Institute of Chicago for four years before enrolling at the Julian Academy in Paris.

Schmidt exhibited at the Pennsylvania Academy of Fine Arts in 1911, the National Academy of Design in 1914, and the Panama-Pacific Exposition in 1915. In 1921 Schmidt visited the Southwest and was so impressed with Santa Fe that he resolved to move there.

The next year, the couple arrived in New Mexico, settling in the village of Tesuque, just north of Santa Fe. They asked Santa Fe artist and builder, William Penhallow Henderson, to design and construct their home.

Schmidt's early paintings are in the manner of the French Impressionists, but he soon developed a modernist style with simplified, sometimes angular drawing, and a bright palette clearly influenced by the Fauves with whom he worked in Paris. He painted mostly in oil or pastel. Schmidt's compositions employed the concepts of Dynamic Symmetry, developed by the artist Jay Hambidge, which use a proportioning system based on specific mathematical ratios including the Golden Section. The Schmidts apparently were able to live on Marjorie's inheritance, and Albert did not feel compelled to actively market his work. However, he did participate in many exhibitions at the Museum of Fine Art in Santa Fe from 1924 until his death, including twelve solo exhibitions.

The Museum held a memorial exhibition for Schmidt in 1958. After Marjorie's death in 1992, her granddaughter inherited the estate and discovered a cache of hundreds of Schmidt's works in the garage of the Tesuque home. 100% Guaranteed to be as described.

We ask for your patience and assure you we are acting as quickly as we can. All lots are accompanied by a name and/or description and lot number for reference.

An approximation can be provided beforehand if requested. Thank you for your cooperation in the matter. EastCoastArt (AKA dealsrus) warrants the authenticity and authorship of our merchandise. All lots are guaranteed to be as described. Prospective buyers are responsible for asking any and all questions about the merchandise, and to view all photos carefully, before purchasing. Should a dispute arise over the authenticity, it is our policy to have the purchaser obtain at their expense, an opinion (or two, in some cases and at our discretion) of recognized experts in the field, mutually acceptable by both EastCoastArt and the purchaser. We try to depict the merchandise and artwork as accurately as possible with photographs.

We do not overly enhance the photos. However, every computer and monitor is different, and how we see the merchandise might differ from what you see. Please bear this in mind when viewing.

Contact before purchasing for any questions you have. Unless otherwise specified, frames are considered a throw-in and are not guaranteed in any fashion. Sizes listed in the descriptions are a very close approximation, ie. If the painting is 12.2 x 14.2 we would describe such as a 12 x 14. The item "ALBERT H SCHMIDT-Chicago Impressionist-Original Signed Mixed Media-Western Scene" is in sale since Wednesday, February 6, 2019. This item is in the category "Art\Paintings". The seller is "dealsrus" and is located in Pottstown, Pennsylvania. This item can be shipped worldwide.