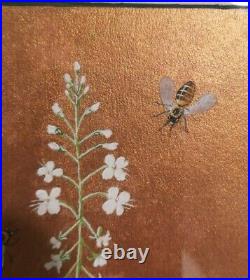 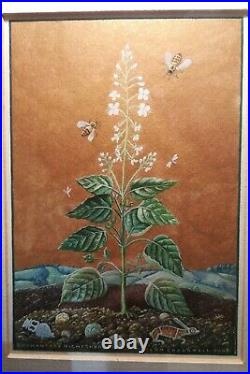 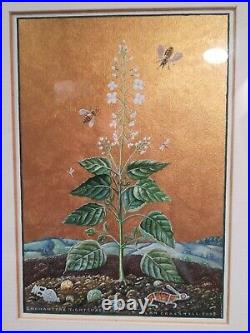 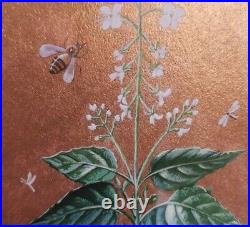 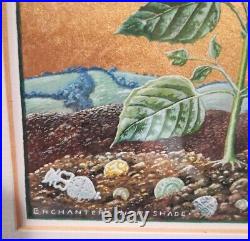 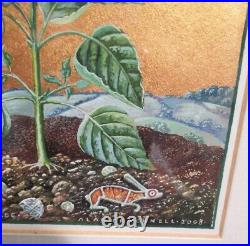 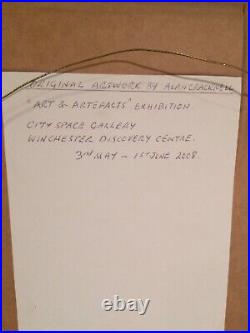 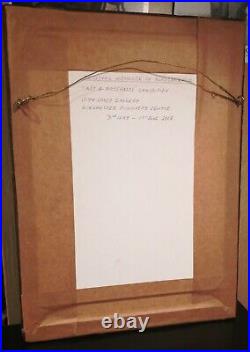 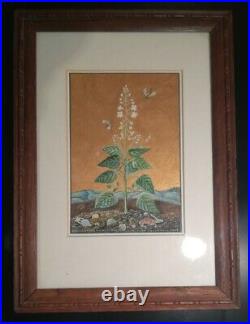 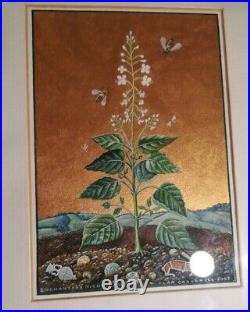 Original Alan Cracknell painting'Enchanter's Nightshade', signed/dated, mounted and framed. This was first exhibited in the Art and Artefacts exhibition at Winchester Discovery Centre in 2008. At the time, Rob Webley from the Portable Antiquities Scheme said:'Alan Cracknell, local Winchester artist, produces detailed, intricate and intensely coloured paintings inspired by his interest in the natural world, history and archaeology.

Reminiscent of medieval manuscript illumination, the paintings often incorporate text, names of ancient lanes or fields, or precious objects excavated from the earth. I bought this painting (in this the original frame) shortly after that exhibition.

On Alan Cracknell: His beautifully detailed artwork influenced by Russian Icons and Medieval miniatures incorporates Nursery Rhyme Characters, Flora and Fauna, Field names and Artifacts in a surreal manner into his work. Medieval meets Alice in Wonderland (Bell Fine Arts). Alan Cracknell (1937-) is probably best known for his highly collectable work as an illustrator from the 1960s onwards, providing striking artwork for books, record covers, and magazines amongst other things.

Examples of his work are in the Victoria and Albert Museum, London. When I was trying to find out more information about Alan, I was delighted to find out he found some real treasure of his own (after metal detecting for 30 years) in 2012, as was reported by the BBC. A Bronze Age gold ring found in a Hampshire field has been declared as treasure by a coroner. The 3,000-year-old double ring was found by Winchester artist Alan Cracknell in February 2010 in a field at Headbourne Worthy.

He was using a metal detector and thought the artefact was an old bottle top when he first picked it up. Following the ruling at Winchester Coroner's Court, ownership of the ring passes to the Crown.

(A reward was shared between Alan and the landowner). Excellent condition, no fading, foxing, discolouration. External dimensions of the frame. Height: 11 3/8 inches or 29cm. Width: 8 3/8 inches or 21.2cm.