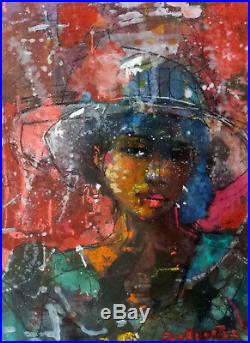 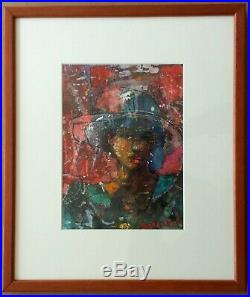 Untitled Woman by Louis Delsarte (1944-). Hand signed by the artist in acrylic, lower right. Louis Delsarte is a figurative artist whose work reflects a departure from the realist style that was predominant among many of the African-American artists during the first half of the twentieth century. His multi-layered works have been described as illusionistic and myth-like, often crossing over into the world of abstraction.

Delsarte's work is in the permanent collection of The Studio Museum in Harlem and at The Metropolitan Museum of Art in New York City. His work has also been exhibited in galleries throughout the United States and Europe, including the Schomberg Center in New York and the Howard University Fine Arts Gallery. In 2002 his most public work could be viewed at the Church Avenue subway station in Brooklyn, where his colorful 120 foot mosaic tile mural, Transitions, could be admired by commuters riding on the D and Q lines. In 2001 Delsarte's work was chosen to be included in the traveling exhibit, When the Spirit Moves: African-American Dance in History and Art. The last stop for the national tour was the Smithsonian's Arts and Industries Building.

Demonstrating the roots and evolution of African-American dance forms, the exhibit included a visual arts section, African American Art Inspired by Dance, which was curated by art historian Samella Lewis. Commenting on the artists, Lewis said, Some are or have been dancers themselves, while others have a history of being motivated by the moods and movements associated with dance. Through time and artistic production each of these artists has demonstrated a devotion to both the physical and spiritual aspects of the dance. Other artists featured in this exhibit included Romare Bearden, Howardina Pindell, Palmer Hayden, Archibald Motley, and Elizabeth Catlett.

Delsarte was born in Brooklyn on September 1, 1944. He grew up and went to school in the Flatbush neighborhood of Brooklyn. He attended New York University, were he earned his BFA in 1967. Ten years later, in 1977, Delsarte received his MFA from the University of Arizona. He is currently a tenured Professor of Art & Humanities at Morris Brown College in Atlanta, GA.

We want you to come back! You have 14 days within which to return your item.