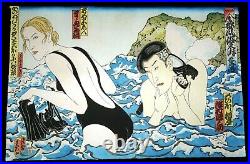 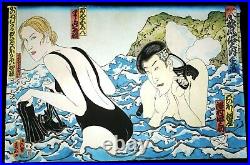 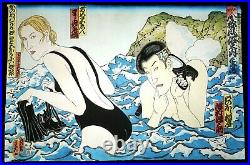 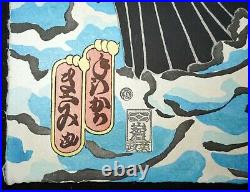 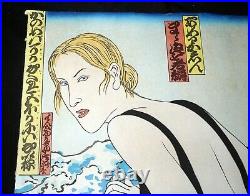 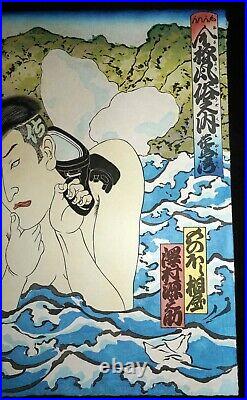 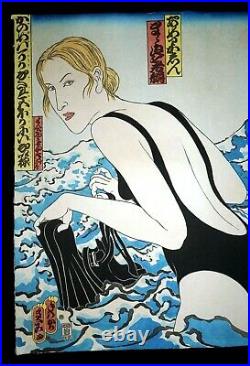 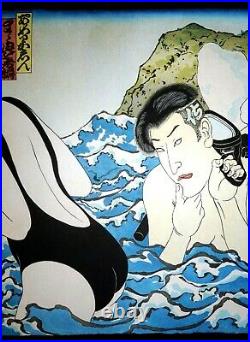 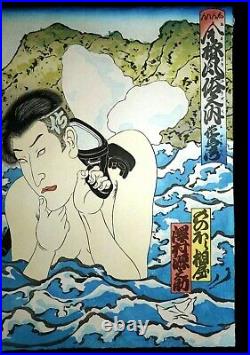 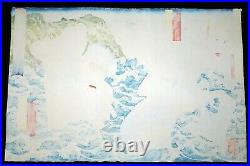 They have been illusive to me in the. Past and it took me a good 10 years to get my hand on this group. While most of Masami's art is watercolor painting on paper or canvas, he has a limited number of works done by various printmaking processes. Other than these, a handful of lithographs and etchings complete Teraoka's forays into the print medium. The condition is described above for more information please check the photos. Sheet 25.25 inches x 38 inches. The pieces were professionally conserved by Oppenheimer Inc.

Who usually deal with Audubon print conservation. We did not want to cut any corners and make sure that these pieces will have longevity. Masami Teraoka is widely known for his watercolor paintings created in the style of Japanese woodblock prints. His canvases display detailed images of traditional geisha and samurai placed in a modern context surrounded by popular American icons. This contemporary artist was born in 1936 in the town of Onomichi, between Hiroshima and Osaka, Japan.

His mother came from a family of artists and his father was a talented musician who ran the family kimono fabric store. After high school Teraoka studied Aesthetics at Kwansei Gakuin University in Japan. In 1961 he moved to Los Angeles, California to concentrate on his artistic career. He enrolled in the Otis Art Institute in Los Angeles, and after seven years graduated with a Bachelor of Arts degree and a Masters degree. Teraoka's style developed out of his interest in Japanese ukiyoe prints as well as the contemporary popular art of Roy Lichtenstein and Andy Warhol.

Instead, he calls his art an American product. His paintings incorporate elements of traditional Japanese portraiture with exclusively American images, flying hamburgers, condoms, a coke can, and sea creatures. The turning point of Teraoka's career was in 1986 with the creation of a four-panel screen painting of a dying mother and child surrounded by a threatening sea. This was part of a series of works having to do with AIDS.

I t is a reflection of the emotions Teraoka experienced when a friends baby contracted the AIDS virus through a blood transfusion. This work established him in the art community and communicated his concern with social issues of the time.

His compilations are commentaries on contemporary culture and the interaction between Japan and America. He tackles issues of multiculturalism, gender, technology and communication.

Over the years his artwork has reflected the era in which it was created. His early paintings dealt with issues of mass consumerism and the destruction of the environment, while his more recent work has a more gothic overtone and is painted with a darker palette on a grander scale. He has exhibited his art all over the world and nationally at the Oakland Museum, California (1983); the Indianapolis Museum of Art, Indiana (1991); the Asian Art Museum of San Francisco, California (1997); and the Yale University Art Gallery, Connecticut (1998).

It is important to know when purchasing items that. Please keep this in mind. As your ratings have immediate discount or listing-standing consequences for me. For all packing materials used. And everything has to be.

To give you an idea, a. If it is not a free one from the Post Office, costs between.

And I usually use at least 3 or 4 feet or more for breakable items. Per box (book box size) will be between. The item "92 Hawaii Mixed Media Woodblock Print Longing Samurai by Masami Teraoka (DaM)" is in sale since Thursday, August 19, 2021. This item is in the category "Art\Art Prints". The seller is "andresharnischbrokerageinc" and is located in Honolulu, Hawaii. This item can be shipped worldwide.