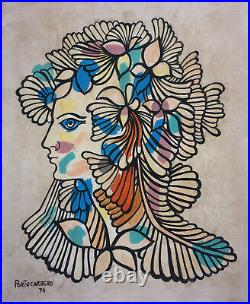 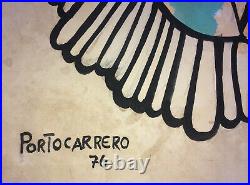 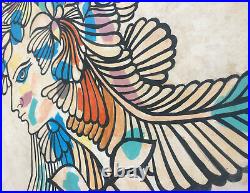 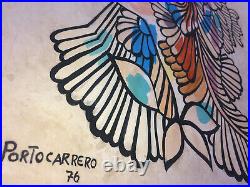 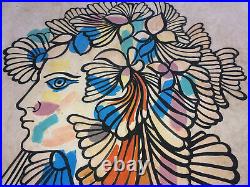 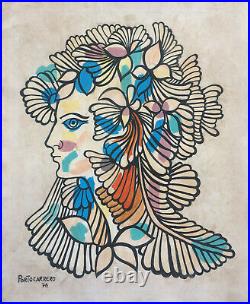 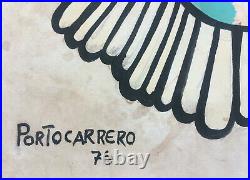 Signed Portocarrero 76; lower left. Beautiful vintage work by one of the most celebrated Cuban artists. Good condition with minor signs of spotting on white background.

René Portocarrero (born Havana, 24 February 1912; died Havana, 7 April 1985) was a Cuban artist recognised internationally for his achievements. Portocarrero began his artistic education at the San Alejandro academy, but left early and is hence considered'self taught'. He put on his first exhibition in 1934, at the Havana Lyceum, beginning a long and fruitful career which included a 1937 collaboration with Mariano Rodríguez and work as a'free studies' teacher of painting and sculpture. After travels in Haiti, Europe and the United States he gave his first show to an overseas audience at Julien Levy's gallery in New York City in 1945. In 1950 he worked with Wifredo Lam, Mariano, Martinez Pedro and Amelia Palaez in the village of Santiago de Las Vegas.

In 1961 he had meetings with Fidel Castro in the Jose Marti National Library where they discussed culture. René received lessons in painting from Nicolás Guillén Landrián.

In 1977 he worked for the Japan Women's Association. In 1979 he worked for UNESCO and AIAP. In the 1980s he was the teacher of Victor Miquel Moreno Piñeiro (Victor Moreno), cousin of Servando Cabrera Moreno. As well as a painter and sculptor, Portocarrero worked as a ceramicist, scenic designer and book illustrator, publishing his own Las Máscaras (The Masks) in 1935 and El Sueño (The Dream) in 1939.

This item is in the category "Art\Paintings". The seller is "old_world_collectibles" and is located in Belleville, Ontario. This item can be shipped worldwide.